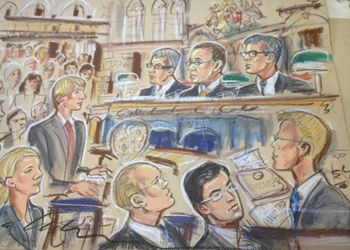 The semi-finals were held at Dartmouth House, the ESU’s headquarters, in London in the morning. Lucy and Quinlan performed brilliantly and they won their semi-final moot against Strathclyde convincingly.

The final was held in the President’s Court of the Royal Courts of Justice in the evening. Lucy and Quinlan performed exceptionally well, but their opponents, Oxford Brookes, won the moot “by a whisker”. Lucy and Quinlan have received cash prizes and mini-pupillages at Essex Court Chambers as a result of their achievement in this national competition.

Dr Stephen Allen, law lecturer at Queen Mary and moot co-ordinator said: “Lucy and Quinlan have done fantastically well in this prestigious national competition. They have done us proud!”