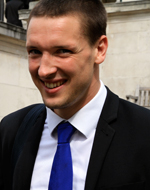 Queen Mary PhD Student Jack Simson Caird's research was referenced by the House of Lords Select Committee on the Constitution in their sessional report for 2010-2012. Jack has written a short piece in Public Law on the Constitution Committee and has also organised an event on the Committee which the report also refers to. His doctoral research focuses on the constitutional scrutiny within Parliament.