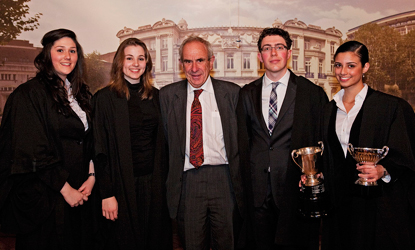 The four students who proved their excellent advocacy skills through the successive rounds to compete in the final were: Tania Rahmany, Jocelyne Smelt, Holly Thomas and Simon Woolf. The moot final was won by Tania Rahmany and she was awarded both the George Hinde Moot Cup and the First Year Moot Cup.

More than 170 students, faculty, alumna and guests attended the moot final, which was held in The Octagon at Queen Mary, University of London. The moot was judged by Lord Leonard Hoffmann, retired Senior Judge of the Appellate Committee of the House of Lords. The moot topic was set in the Supreme Court and concerned the right to privacy, policing and student demonstrations.

Professor Peter Alldridge, Head of the Department of Law, described Lord Hoffman’s judgment as ‘incisive and beautifully articulated’ and said that the way he conducted the moot was ‘entertaining and enormously constructive’.

The George Hinde Moot competition has been established for over 40 years. This year 176 law students took part in the competition, which was overseen by student Moot Master Aaron Osborn. The semi finals were held at Snaresbrook Crown Court and were judged by His Honour Judge Freeland QC and His Honour Judge Bing.

"All the students acquitted themselves fantastically well from the first round to the last which made overseeing the competition thoroughly enjoyable. I would also like to thank members of staff in the law department and the student judges who assisted me during the competition.”

“The level of mooting this year was exceptional. I was particularly impressed with the performance of the first year students, including our three first year finalists. Congratulations to all who participated, and renewed thanks to Aaron Osborn, who did a marvellous job as the Moot Master this year.”