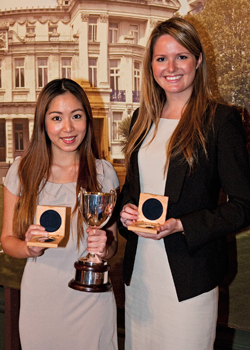 This year’s 2,000 word essay subject was ‘If you could implement a probono project of your choice, what would you do, why and how’. The essays were judged by a panel of solicitors and partners from Field Fisher Waterhouse.

The judges look for a sound grasp of the law, strong awareness of current affairs and originality of thought. They described the winning essays as ‘bold, challenging and well written’.

Pro bono refers to legal services that are performed free of charge for the public good. The winner, Jessica Kam, proposed a pro bono project to help young entrepreneurs. The judges thought this was a particularly good choice in the current economic climate as it could help reduce youth unemployment. Runner-up Jennifer Jeffrey described a pro bono project to provide legal counselling for women who have been subjected to ‘corrective rape’ in South Africa.

The competition winners were announced at the George Hinde Moot Competition Final on 29 March 2012. The prizes were awarded by Shireen Irani, founder and executive director of  i-ProBono and Corporate Social Responsibility Programme Manager at Field Fisher Waterhouse.

"Field Fisher Waterhouse lawyers work regularly alongside the student advisers at Queen Mary to offer members of the public pro bono legal advice. We are delighted to be able to further build on this relationship by once again awarding the annual essay prize. The judging panel had a tough time coming to a decision but felt that Jessica and Jennifer's essays were the most effectively argued, demonstrating a good understanding of the law as well as the issues affecting communities in the UK and overseas. We look forward to welcoming both of them to to our vacation scheme and hope that they find it a valuable experience."