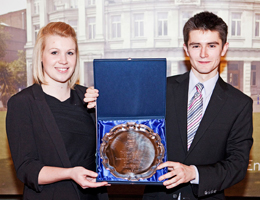 Students from Queen Mary used their advocacy skills to beat teams from universities across the UK and Ireland to win the Thomas A Finlay Moot Court Competition.

Margaret Cunningham, Coordinator, said: “This was the first year that Queen Mary was represented in this competition, by two motivated and talented teams. Participating in such competitions truly enriches the undergraduate law student experience."

The other Queen Mary team, Eduard Kutenic and Bonis Llukaci, also performed well and progressed to the final rounds of the competition.