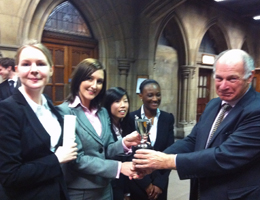 Queen Mary went head to head with Oxford University in the final of the ELSA Contract Moot, which was held in the Royal Courts of Justice on 22 March 2011. The Queen Mary team members were Tricia Hemans, Fiona Du, Danielle Hamilton and Lucy Limbrey. Lucy Limbrey also won most outstanding competitor of the competition.

The Queen Mary Mooters said, “Competing in the ELSA Contract Law Moot was an invaluable experience. It is unlike any other mooting competition. We were given the chance to make an interim application and cross-examine a witness. None of the Queen Mary Team members had experienced this before so it was a big challenge but great fun. Better still, we got to moot before Lord Neuberger!"

The competition provided valuable experience for prospective barristers and was open strictly for undergraduates and those studying the Graduate Diploma in Law. It was co-organised by ELSA Committee member and Queen Mary undergraduate law student Joseph Holland.