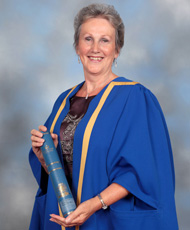 Mrs Sophia Oliver was awarded the Queen Mary Medal for Staff at the law graduation ceremony in July 2011.

The Queen Mary Medal is awarded in recognition of exceptional and sustained contribution to the College and performance and commitment beyond the normal requirements of the post.

Mrs Oliver showed exemplary dedication and commitment to Queen Mary for over 20 years and had a lasting impact on staff and students. She took early retirement in October 2010. During her time in the Department of Law she held a number of administrative functions, including seven years as undergraduate examinations officer. Staff and students relied on Sophia’s vast knowledge and experience in this area to provide feedback and help shape policy for students.

Professor Peter Alldridge, Head of the Department of Law, said: “Staff welcomed her commitment and engagement with them but at the same time her ability to make them deliver on the writing of scripts and marking them!” 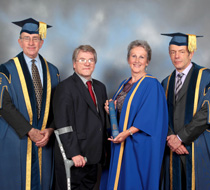 Mrs Oliver also demonstrated a great deal of sensitivity, patience and compassion when dealing with students and their personal problems. For most of her employment these activities were not part of her formal job description, although in recent years her skills were recognised by giving her a formal role as a pastoral adviser.

Ian Yeats, Senior Lecturer in the Department of Law, described Mrs Oliver as a source of accurate information and sensible counsel to students, who frequently sought her advice. Mr Yeats said: “It was quite common, even after they had graduated, for former students to consult her if only to ask how and from whom they could obtain the information they needed.”

Rosa Freedman, former Graduate Student Adviser: “When providing pastoral support to students I would regularly rely on Sophia for advice, seeking help with how best to advise students or where to send them for support services within the university. She always made time to listen and engage with each student's problems, and provided wise counsel.”