The 2021-22 Cotterrell Lecture in Sociological Jurisprudence will be delivered by Professor Lorraine Daston. Professor Daston is Director Emerita of Max Planck Institute for the History of Science, and Professor at the Committee on Social Thought at the University of Chicago. 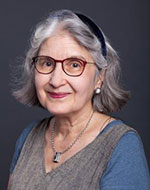 Lorraine Daston has published on a wide range of topics in the history of science, including the history of probability and statistics, wonders in early modern science, the emergence of the scientific fact, scientific models, objects of scientific inquiry, the moral authority of nature, and the history of scientific objectivity. Recent books include Gegen die Natur (2018; English edition Against Nature, 2019) as well as Science in the Archives (2017) and (with Paul Erikson et al.) How Reason Almost Lost Its Mind: The Strange Career of Cold War Rationality (2014), the latter two both products of MPIWG Working Groups.

Her current projects include a history of rules, the meaning of modernity in the history of science, international governance in science since the late nineteenth century, and the relationship between moral and natural orders.

She is the recipient of the Pfizer Prize and Sarton Medal of the History of Science Society, the Schelling Prize of the Bavarian Academy of Sciences, the Lichtenberg Medal of the Göttingen Academy of Sciences, the Luhmann Prize of the University of Bielefeld, and honorary doctorates from Princeton University and the Hebrew University. In 2018 she was awarded the Dan David Prize in the History of Science. In addition to directing Department II of the MPIWG, she is a regular Visiting Professor in the Committee on Social Thought at the University of Chicago and Permanent Fellow of the Wissenschaftskolleg zu Berlin.