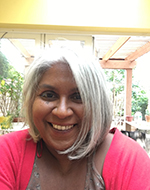 Professor Suthersanen holds a Chair in Global Intellectual Property Law, having gained her degrees in law from the National University of Singapore and the University of London. She is the Director of Queen Mary Intellectual Property Research Institute. She is also a member for the Law Unit of Assessment (sub-panel 18) for the Research Excellence Framework, REF 2021.

She began her scholarly career in Queen Mary as the Herchel Smith Research Fellow, followed by the Financial Times Law & Tax Fellowship, before becoming a tenured lecturer in 2001. In 2009, she was conferred a Personal Chair at the Centre for Commercial Law Studies. She sits on the Executive Committee of the British Literary and Artistic Copyright Association (ALAI-UK), and is a Visiting Professor (WIPO-University of Ankara, and an Overseas Fellow of the I.P. Academy of Singapore. She has been interviewed and quoted in various international media including the International Herald Tribune, the Guardian and BBC Radio 4 (Law in Action).

In relation to larger funding and collaborative projects, Professor Suthersanen is focussing on IP rules in relation to cultural heritage and cultural property; AI regulation and its interface with IP and competition rules.

Having seen through the second edition of Dutfield & Suthersanen on Global Intellectual Property Law (Edward Elgar, 2020), which involved a lot of reading and writing, Uma is indulging herself by writing on a wide array of concerns with global impact – either within contemporary scenarios or from historical perspectives. Her writing projects are: “Asimov, Star Trek and Electric Sheep: cultural readings on regulating AI, inventions and art”; “The evolving role of branding in pharmaceutical lifecycle management: implications for competition and access to medicines” (with G. Dutfield);; and “IP and Cultural Heritage Issues for Museums of Archaeological Materials” (forthcoming in Research Handbook on Intellectual Property and Cultural Heritage" (ed. Irini Stamatoudi); Edward Elgar 2022). A bigger project is with Gillian Davies on re-contextualising earlier editions of Copyright and Public Interest and writing new chapters (admittedly late). A more quixotic project is the genesis of English copyright and patent doctrines within 18th century jurisprudence, with a focus on Lord Mansfields’ decisions. An initial foray in this area resulted in: Pope versus Curll (1741) Revisited: Being A fair and true Account of the Views of certain well-respected Authors on Publishing, Pyracy and Propertie in the Eighteenth Century (published in S.Ghosh (ed), Forgotten Intellectual Property Lore, Edward Elgar, 2020, with G. Dutfield).

Uma claims the “currently working on a monograph” status – and is actually currently working on a monograph which attempts to construct a fresh theoretical framework in relation to intellectual property rules. Some of the theoretical framework is worked in a forthcoming publication - “Intellectual Property between Creativity and Investments: A Theoretical Framework’ (forthcoming in Patrick Goold and Enrico Bonadio (eds.), The Cambridge Handbook of Non-Creative Intellectual Property, Cambridge University Press, 2022).

Uma’s personal research mission is to build a framework of intellectual property rules by locating it within law and policy discourses on innovation, creativity and public interest. We may better understand the entire legal construct of IPRs through different spaces and times by embracing an international and comparative legal approach (which acknowledges the divergences in legal families and justificatory bases) and by re-framing norms and practices governing intangible property, human and societal rights. And whilst this mission may never be fulfilled, she believes (perhaps delusionally) that she has achieved several goals in this respect: (i) initiated a more critical perspective on utility models by arguing that such hybrid rights have to be designed on the basis of endogenous economic, development, and innovation environments, taking into account the local competencies and collective behaviours - as these rights challenge the justificatory bases of all other intellectual property rights, as well as accepted competition norms [see outputs on utility models and minor innovations]; (ii) produced several comparative doctrinal studies in the period 1996-2016 on the legal protection of consumer objects as a socio-legal phenomenon by exploring justifications and functionality doctrines within copyright, design, trade mark and competition laws (citations of her work include two by the Advocate General for the CJEU, and she was the academic lead and main scientific author of the European Commission’s 2016 Legal Review of Industrial Design Protection in the EU); (iii) pioneered the use of stakeholder analysis as an analytical tool for exploring unusual patterns within the right to education, orphan works, bio-cultural heritage, and the evolution of international copyright norms.

Uma Suthersanen has supervised a total of 29 students to successful completion (as primary or secondary supervisor – see below for full list). She welcomes proposals for supervision in intellectual property law in general. She would be most helpful as a supervisor for proposals which fall within her current areas of research interest: Justifying Intellectual Property Rules or Globalisation of IPRs. Aspects worth considering are: