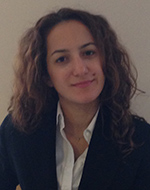 Maria Ioannidou is a Senior Lecturer in competition law at the School of Law, Queen Mary, University of London where she also serves as the Deputy Director of the Interdisciplinary Centre for Competition Law and Policy. Previously, she was a Lecturer in law at the University of Surrey, where she taught constitutional, contract and EU law. She has also practiced competition law in leading law firms in Athens, Greece and Brussels, Belgium. Maria studied law in Athens (BA, LLM) and Oxford (MJur, MPhil, DPhil), during which time she also worked as a researcher and conducted legal research in a wide range of EU and US competition law issues.

Since September 2019, she has joined the Hellenic Competition Commission as Board Member/Commissioner Rapporteur.

Maria’s current research addresses the changing role of consumers in the 4th industrial revolution. It focuses on the impact of AI, big data and digital platforms on consumer choice. The main research question is how fast technological developments impact our consumption behaviour, what are the promises, challenges and risks and how the legal framework should adjust, in particular competition and data protection law. Maria has been invited to give evidence to the UK All Party Parliamentary Group on AI and has submitted written evidence to House of Lords Select Committee on AI.