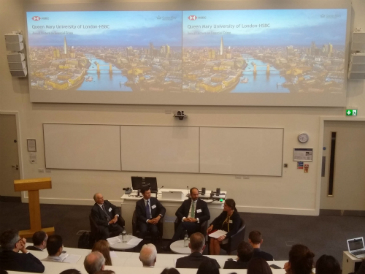 On 10 September 2019, the Institute of Banking and Finance Law (IBFL) invited the legal community and relevant actors in the financial sector to attend the inaugural Queen Mary University of London-HSBC Lecture on Financial Crime.

Mr Xiangmin Liu, the Director-General of the Legal Department at the People’s Bank of China, delivered the lecture. Mr Liu accepted the position of President of the Financial Action Task Force (FATF) in July 2019, and is the first person from China to hold that position.

Sir William Blair, Professor of Financial Law and Ethics at Queen Mary, Centre for Commercial Law Studies (CCLS) and member of the IBFL, introduced inaugural lecture and Mr Liu, who made his first official speech as President of the FATF.

Following Mr Liu’s lecture, Mr Colin Bell, HSBC’s Group Chief Compliance Officer, also delivered a speech addressing aspects of Mr Liu’s talk. This was followed by a vivid discussion between Mr Liu, Sir Blair, Mr Bell and Prof. Rosa Maria Lastra, who is Sir John Lubbock Chair in Banking Law and Chair of the IBFL. Prof. Lastra put some interesting questions to Mr Liu on the topics of his lecture, which generated a compelling debate within the panel.

The lecture ended with Prof. Rosa and Sir Blair praising all the people involved in the organisation of the event, and the beginning of a longstanding and fruitful partnership between HSBC and Queen Mary.

There were reception drinks after the lecture, sponsored by HSBC and had the logistical support of 3VB’s International Advisory and Dispute Resolution Unit.

Mr Liu’s lecture has since been published on FATF’s website.