Law School Students from the University of Adelaide visit CCLS

A group of law students from the Law School of the University of Adelaide visits CCLS for a study tour.

Twenty-one undergraduate law students from the Law School of the University of Adelaide, (ALS) South Australia, (11 women and 10 men), visited CCLS in early February 2020 for a two-week study tour. The tour was led by Professor Christopher Symes and Mrs Corinne Walding, School Manager.

The purpose of the tour was to give the law students an opportunity to gain first-hand experience of postgraduate study at a leading commercial law school and to form initial impressions of the UK, and London in particular, as a place to live and work, especially for those students who had not previously visited the UK. The study tour therefore combined academic rigour, with professional, cultural and social activities, to give the students a “rounded” experience that would broaden their vision and professional ambitions.

The study tour was designed by the ALS tour leaders in consultation with CCLS International Advisor, John Taylor (himself an ALS alumnus). The programme had strong support from several CCLS colleagues, including Professors Ian Walden and Anne Flanagan, who, along with other members of staff, welcomed the ALS visitors during a reception held on their first day at CCLS. The academic content of the tour primarily consisted of the students auditing several postgraduate classes at CCLS in various areas of the law (including finance, tax, IP, media, insolvency, shipping), as well as attending classes taught by Professor Symes and other classes (e.g. on EU law) taught by CCLS academics.

Beyond the formal CCLS academic programme, they attended the CCLS Energy Law Institute Annual Lecture on climate change with an evening reception at the law firm of Clifford Chance at Canary Wharf and also visited the specialist litigation law firm of Lipman Karas.  The students also attended football games and visited world famous art galleries, museums, West End theatre shows, pubs and restaurants. At the end of their stay, the students enjoyed a guided tour of the Honourable Society of Lincoln’s Inn arranged by Professor Sir William Blair, whose father taught at ALS in the 1950s. 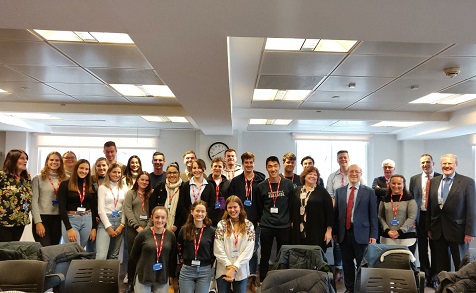 The ALS students were required to write daily blogs during their study tour. In these perceptive and entertaining blogs, the study tour was said to be “a great balance between academic study and the opportunity to explore and travel”, a ”consensus being that the courses were advanced and challenging, but extremely interesting”, with London being a “melting pot of different cultures, cuisines and customs”.  Professor Symes has been very pleased with the quality of the essays that students had to write when they returned to Adelaide and considers that the tour “was hugely successful”.

Professor Walden looks forward to welcoming the students to become postgraduate candidates at CCLS and also hopes that the study tour will now become an annual event in the CCLS and ALS calendars as soon as public health conditions allow.

Finally, special mention is made of the assistance provided by LLM Coordinator, Sue Sullivan, who with great skill and good management, juggled the demanding task of arranging/re-arranging for the students to attend classes in subjects of most interest to them.