Douglas gained a Masters in Banking and Finance Law at QMUL in 1996. He has had a long and prestigious academic career and is currently Kerry Holdings Professor in Law at the University of Hong Kong. 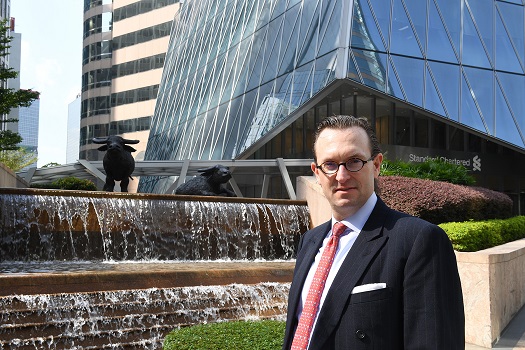 Douglas studied for a Masters in Banking and Finance Law at QMUL in 1996. Since graduating he has had a long and prestigious academic career and is currently Kerry Holdings Professor in Law at the University of Hong Kong. He is a leading authority in the field of financial regulation.

Douglas W Arner is one of the world’s leading experts on financial regulation, particularly the intersection between law, finance and technology. He is the Kerry Holdings Professor in Law and Director of the Asian Institute of International Financial Law at the University of Hong Kong, where he is also Director of the Faculty of Law’s LLM in Compliance and Regulation, LLM in Corporate and Financial Law, and Law, Innovation, Technology and Entrepreneurship (LITE) Programmes. Douglas served as Head of the HKU Department of Law from 2011 to 2014 and as Co-Director of the Duke University-HKU Asia-America Institute in Transnational Law from 2005 to 2016. He has published eighteen books and more than 200 articles, chapters and reports on international financial law and regulation, including most recently Reconceptualising Global Finance and its Regulation (Cambridge 2016) (with Ross Buckley and Emilios Avgouleas) and The RegTech Book (Wiley 2019, with Janos Barberis and Ross Buckley). His recent papers are available on SSRN, where he is among the top 80 authors in the world.

Douglas is a Senior Visiting Fellow of Melbourne Law School, University of Melbourne, an independent non-executive director of the Nasdaq and Euronext-listed Aptorum Group, and an Advisory Board Member of the Centre for Finance, Technology and Entrepreneurship (CFTE). He was an inaugural member of the Hong Kong Financial Services Development Council, of which he was a member from 2013-2019. Douglas has served as a consultant with, among others, the World Bank, Asian Development Bank, APEC, Alliance for Financial Inclusion, and European Bank for Reconstruction and Development, and has lectured, co-organised conferences and seminars and been involved with financial sector reform projects around the world. He led the development of the world’s largest massive open online course (MOOC): Introduction to FinTech, launched on edX in May 2018, now with over 75,000 learners spanning every country in the world.

From 2012 to 2018, Douglas led a major research project on Hong Kong’s future as a leading international financial centre. He has been a visiting professor or fellow at Duke, Harvard, the Hong Kong Institute for Monetary Research, IDC Herzliya, McGill, Melbourne, National University of Singapore, University of New South Wales, Shanghai University of Finance and Economics, and Zurich, among others.