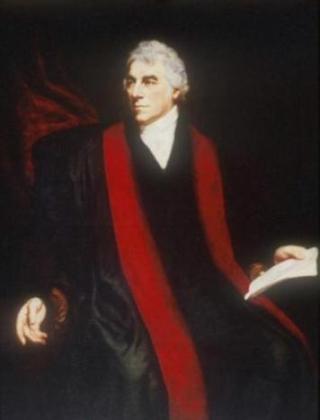 The Blizard Institute is named after Sir William Blizard. In 1785 Blizard founded the first medical school attached to a hospital, The London Hospital, which is still serving East London with a brand new building just a few yards from the Blizard.

Blizard (1743/44 - 1835) studied at the London Hospital and attended lectures including those of William Hunter, the Scottish surgeon, teacher, and art collector. He was appointed surgeon to the London Hospital in 1780, and with Robert Maclaurin, founded its School of Medicine in 1785. There he lectured on anatomy, physiology, and surgery, and continued to do so until he was in his 80s. He is thought to be the last surgeon to continue the practice of giving consultations and advice in coffee houses, attending Batson’s in Cornhill. He was master of the Royal College of Surgeons in 1814, and president in 1822–23. He became a fellow of the Royal Society in 1787 and a fellow of the Royal Society of Edinburgh in 1799, and was knighted in 1802.

Blizard was noted in his time, and is remembered today, not so much for his contributions to research, but for his teaching and for the breadth of his interests in science and society. He introduced the practice of walking the wards, nowadays an indispensable part of medical education.

As a young man he was active in radical politics, supporting the journalist and MP John Wilkes who was notable for his campaigns to open up parliamentary business to the public and who had a particularly high profile in the turbulent East End. Later he became more involved in philanthropic and charitable activities. He founded the Samaritan Society of the London Hospital “for the relief of such distresses of patients of The London Hospital as are not within the provisions of this institution”, that is, for their financial support, reflecting an awareness of medical responsibilities beyond the clinic. He was involved with the Deaf and Dumb Asylum, the Clergy Orphan Asylum, and the London Orphan Asylum. Like other reformers of the time he looked to improve education and to spread scientific knowledge, for instance writing advice for sailors on first aid and in particular on the use of tourniquets. He had interests in prison reform, and in ensuring the respectful treatment of dead bodies; he received the bodies of executed criminals at the Royal College of Surgeons in his formal court dress as president of the college.

Blizard was one of the founder members of the Medical Society of London in 1773, and of the Medical and Chirurgical Society in 1805. The latter allowed as honorary members those who, while not practising in medicine, were involved in related sciences – scientists such as the botanist Sir Joseph Banks and the chemist Humphry Davy. It later became the Royal Society of Medicine, the former president of which, Prof Parveen Kumar, is a gastroenterologist in the Blizard Institute. He  was the first president of the Hunterian Society in 1819, and was instrumental in encouraging the society to follow John Hunter’s spirit of research into all aspects of medicine and surgery.

Blizard wrote poetry all his life, ranging from a commemoration of the founding of the Medical School of The London Hospital, set to music and performed at the London Tavern, to a reflection on the loss and regaining of his eyesight when he was about 91.

Blizard’s science, teaching, and research stressed dignity - of the patient, the human body, and the doctor – and also precision in language and practice. His scientific work was never without an ethical underpinning. According to John Abernethy, who founded the Barts medical school, Blizard urged students

Let your search after truth be eager and constant. Be wary of admitting propositions as facts before you have submitted them to the strictest examination. If after this you believe them to be true, never disregard or forget one of them. Should you perceive truths to be important, make them the motive of action, let them serve as springs to your conduct.