About the Blizard Building 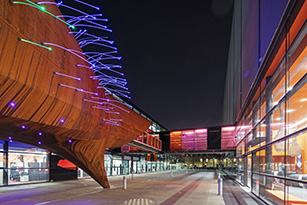 The Blizard Building of The Faculty of Medicine and Dentistry is named after Sir William Blizard FRS PRCS, who led the foundation of the London Hospital Medical College.

The building is home to the Blizard Institute and was opened in October 2005 by HRH The Princess Royal, Chancellor of the University of London.

The origins of this state-of-the-art centre for research and education began at the dawn of the 21st century when the case for a new facility for the School of Medicine and Dentistry at Whitechapel was approved. A total amount of £45 million was invested in the project which took just under five years to reach fruition. The foundation stone was laid by Professor Colin Blakemore FRS in November 2003.

The building was designed by leading architect Will Alsop in partnership with Amec with its 9,000m2 providing world-class teaching and research facilities including open-plan laboratories, office space and the 400-seat Perrin Lecture Theatre.

Also housed within the building is a public ‘understanding of science facility’; the Centre of the Cell. This interactive education centre is aimed at children in the local community who are encouraged to develop an interest in science and research. 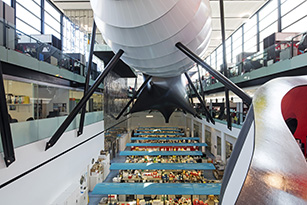 The building is divided into four main areas: laboratory research space; study and seminar spaces; reception area, cafeteria and lecture theatre; and site deliveries and parking. A combination of open-plan and cellular offices is arranged along the perimeter of the glass box with the void in the centre allowing natural light to pour down into the lower ground. This void also accommodates the four pods. These pods are designed to appear as ‘a family of objects floating freely in the large, airy volume’ and are intended to evoke associations with cellular and molecular forms.

Internationally recognised sculptor, painter and artist, Professor Bruce McLean, formerly Head of Graduate Painting at the Slade School of Fine Art at UCL, was commissioned to add the colour to the glass walls. The panels contain a mixture of words and images, the words chosen by Professor Mike Curtis and Professor Fran Balkwill for their multiple meanings. They include Genome, Lipids, Proteins, Networks, Pathways and Architectural Genes.