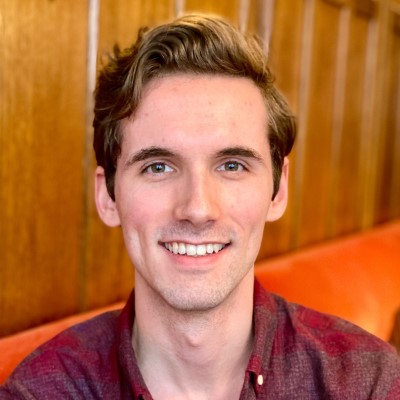 Why did you choose to study a BA in Film Studies at Queen Mary?

London has always been the place for me, so discovering Queen Mary’s film course was quite literally a dream come true. Combining campus life with the hustle and bustle of London life was everything I’d hoped it would be. The course featured both production work and theoretical study, which is an essential mix if you’re looking to embark on a more practical career in the film industry. I looked at other courses around the country, many of which were 100% theory - so you’d essentially leave university with zero practical experience unless you sought it out elsewhere. The other huge bonus of studying at Queen Mary is the Music Society. I’ve played the trumpet since I was seven, and whilst I’ve never wanted to pursue a career in music, playing in Queen Mary’s Orchestra and other groups quickly became one of the best parts of my experience. In fact, I still play with them ten years on under Paul Edlin’s fantastic leadership. Where does the time go?!

Were there any academics that had a strong influence on shaping your time and studies here?

Gosh there are too many to name, and I couldn’t possibly single them out. That being said, Guy Westwell, Athena Mandis, Libby Saxton, Charles Drazin, Lucy Bolton and Sue Harris (to name a few) were instrumental in my success at Queen Mary. I vividly remember an introduction to the course Sue gave back in 2011 on one of Queen Mary’s open days (before I became a student) - I felt right at home instantly and couldn’t wait to apply!

Can you describe your career path since you graduated and touch on your current role as a Freelance Video Editor and your work as the co-founder of Pocket Blockbuster?

There were ample opportunities during my studies to do work experience in and around Queen Mary (another reason studying in London is great!). I knew early on that I wanted to pursue film/video editing, so took the plunge into a freelance career when I graduated. I’ve never looked back, and video editing is still a huge part of what I do. You can find one of the first films I edited, a cute romantic comedy called Art Ache on Amazon Prime.

A few years later I set up Pocket Blockbuster with my business partner, Will (who I met on a short film shoot), to help us pursue our shared interests and dreams on a larger scale. We kicked off the company with a series called Cooking with Soul on YouTube and we’re now working with a range of clients such as Abbey Road Studios and Ivy House. We set out to have fun, and that’s one of the key criteria in deciding the work we take on!

Additional to this has been a project very close to my heart, Child Migrant Stories. This has been a collaboration with my great friend and Queen Mary alumna, Dr Eithne Nightingale, whose research into child migration inspired the films. We won a Queen Mary Public Engagement Award for our work and five years later we’re still collaborating, having just started work on Stay Home Stories, led by Queen Mary School of Geography Professor, Alison Blunt. This project and its films look specifically at the impact of COVID-19 on people’s lives, asking how the pandemic has changed our relationship to home.

My interest in film emerged from my love for music and playing the trumpet. I’m obsessed with film music, and the impact a soundtrack can have on the films we all know and love.

You recently featured on the podcast, Extraordinary Unplugged in an episode called ‘Having the courage to be me’, which tackles issues around ‘coming out’. What are some of the challenges that you feel people still face today when it comes to sharing their true identity, and what has been the impact of sharing your story publicly both for yourself and for others?

I mention this in the podcast but something I’ve always struggled with, is the very fact that people who are ‘different’ in this world eventually have to ‘come out’. Why don’t straight people have to come out? Throughout history human beings have struggled to adapt to the ‘other’ or things that are outside of the general majority’s comfort zone. We’re seeing this play out again at the moment, particularly in the trans community. It’s one of the reasons Child Migrant Stories has been such a passion project - the themes of the ‘other’ are the same. My utopian vision for the future is that it simply won’t matter who you are, who you love or where you choose to call home. If I ever have kids that’s the world I want them to grow up in! I certainly hope they’ll never have to ‘come out’ and can just be who they want to be one way or another.

Chatting with the lovely Elke Edwards on this podcast was such a pleasure. My hope is that my story of coming to terms with who I am and the difficult conversations I faced over the years, will help others to do the same, sooner rather than later. You can listen to the episode in the following places:

One of the things I love about Pride all around the world every year is that it highlights where we are and where we still need to go, in an all-inclusive and loving way. I can’t wait to get back to those celebrations when this pandemic finally subsides! I’ve already mentioned my utopian dream - it’s then that ‘equality’ and ‘representation’ as buzzwords will hopefully disappear, because the problem will be solved! But back in the present, it’s about being open and inclusive. We need more of that. We need more people to hold their (sometimes very damaging) opinions lightly in the face of people being different.

Are there any myths or misconceptions about the LGBTQ+ community you’d like to bust for our audiences reading this profile?

We’re not all obsessed with Ru Paul’s Drag Race! A group of my close friends are desperate for me to love it, but it just hasn’t clicked. I love the Snatch Game though that’s featured every season… they should have a separate show based around that. I’d watch!

One of my fondest memories was working on a project with the Mile End Institute and the film department’s former in-house production company, which led us to 10 Downing Street. We filmed and interviewed the former Cabinet Secretaries, the “Men of Secrets”. I was 19 at the time, so you can imagine, it was incredibly exciting and overwhelming to find myself inside Number 10.

Is there any advice you would give to current students or recent graduates interested in a career in film editing?

Make things! We live in an age of immensely powerful technology that just so happens to fit in our pockets. I’ve long been a supporter of smartphone-based filmmaking because it really does democratise the playing field (we shot Child Migrant Stories on an iPhone 6s back in 2016!). Even when I started my degree in 2011, I wouldn’t have dreamt I’d be able to edit 4K in buttery smooth fashion from my phone.

And now for a word that everyone hates - networking. It really is a tired word, but the basic idea still rings true. Incidentally I’m not talking about forcing yourself to specifically designated networking events (they’re often very annoying), but more events that interest you in general. Whether it’s a screening or even a Zoom based Q&A, there’s bound to be something out there where you might just meet someone you’ll end up working with. There’s only one way to find out…

On that note, for those reading this who are just getting started in editing or even if you’re more experienced, I’d love to hear from you - mitch@pocketblockbuster.com.

This profile was conducted by Alumni Engagement Coordinator, Nathalie Grey. If you would like to get in touch with Mitch or engage him in your work, please contact Nathalie at n.grey@qmul.ac.uk.