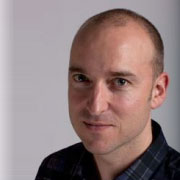 I am a graduate of Keele University (BA Hons) and the University of Glasgow (MPhil, PhD). I joined Queen Mary in 2006. My research focuses on the war film and antiwar film, film and politics, film and cultural memory, 9/11 and film, and iconic photographs and film. I welcome applications from students interested in pursuing doctoral research in any of these areas. At undergraduate level I teach FLM4200 Concepts and History, FLM308 Contemporary Hollywood Cinema, and FLM603 Mapping Contemporary Cinema. At postgraduate level I teach on the MA core course and deliver the optional module 9/11 and American Film. I was the recipient of Drapers' Award for excellence in teaching in 2009.

I am the editor of the Mapping Contemporary Cinema website, a student writing project, which publishes in-depth accounts of contemporary US, German, French and Russian British films, as well as short guides on a range of different themes.

'In country: narrating the Iraq War in US cinema', in A Companion to the Historical Film (Wiley-Blackwell, 2012).

'In country: mapping the Iraq war in recent Hollywood combat movies' in Screens of Terror: Representations of War and Terrorism in Film and Television Since 9/11 (Abramis Academic, 2011), pp.19-37.