I am a cardiologist sub-specialising in arrhythmia management (Electrophysiology and devices). I trained in London and the South East before my PhD at St Bartholomew’s in mechanisms sustaining AF and novel methods for catheter ablation. During that time I was a finalist for both the British and the US Young Investigator of the year award (2011). I became a consultant at Barts in 2013 and have been the lead for AF services since the merger creating the Barts Heart Centre in 2015. I perform catheter ablation for all types of arrhythmia including atrial fibrillation, atrial tachycardias and ventricular tachycardia (VT). I also implant, revise and extract a range of pacing devices including defibrillators, biventricular devices (CRT), sub-cutaneous ICDs, and leadless pacemakers.

The Barts Heart Centre is the largest cardiovascular centre in Europe and is a regional and national referral centre seeing complex quarternary referrals from around the country. The Barts Heart Centre has the largest volume of ablation and device-related procedures in the UK. We also run the UK's only direct admission service for arrhythmia emergencies, offering the full range of pacing and ablation services 24/7.

My research now is predominantly clinical research investigating mechanisms and treatment of cardiac arrhythmias. I also collaborate with basic medical scientists at The WHRI and Engineers at QMUL. My work is supported by grants from The British Heart Foundation, The Barts Charity and Industry. I supervise 5 PhD students at the time of writing.

I am also Editor-in-chief of ‘Cardiac Rhythm News’, a quarterly journal focusing on the latest scientific and clinical advances as well as industry releases relevant to heart rhythm management. It has a readership of > 3500 European and US-based cardiologists.

I am a consultant at The Barts Heart Centre, the largest cardiac centre in Europe. The Electrophysiology department (heart rhythm management) is a world-class academic unit and I am privileged to be part of this large team. My research is clinical in nature and involves studying patient’s hearts or their outcomes after treatments. The primary focus of my research is understanding mechanisms and improving treatment for arrhythmias and atrial fibrillation (AF) in particular. This work is currently supported by The British Heart Foundation, Tha Barts Charity, and Industry (Biosense Webster and Medtronic). The main ongoing strands to my research are: 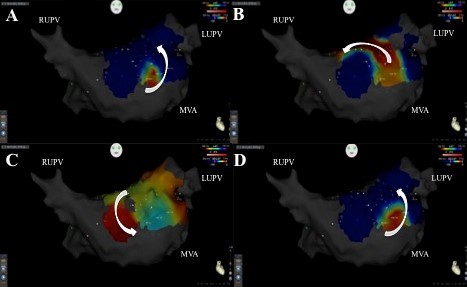 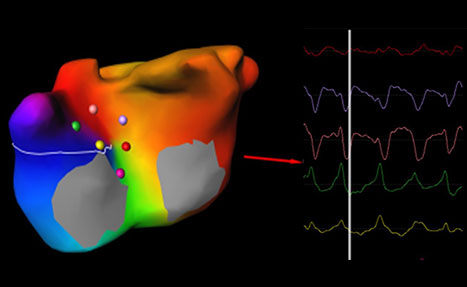 The two figures show maps created in AF (one using Cartofinder and the other with ECG-I) with rotational activity in the left atrium supporting AF depicted by colours.