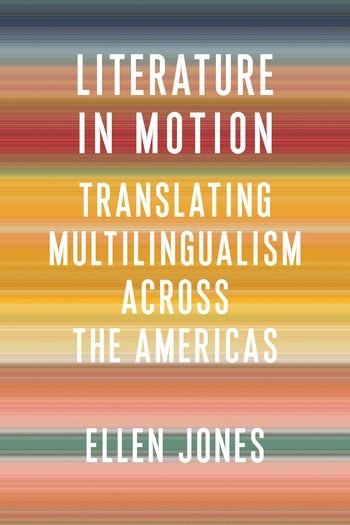 Literature is often assumed to be monolingual: publishing rights are sold on the basis of linguistic territories and translated books are assumed to move from one “original” language to another. Yet a wide range of contemporary literary works mix and meld two or more languages, incorporating translation into their composition. How are these multilingual works translated, and what are the cultural and political implications of doing so? In Literature in Motion, Ellen Jones offers a new framework for understanding literary multilingualism, emphasizing how authors and translators can use its defamiliarizing and disruptive potential to resist conventions of form and dominant narratives about language and gender. Examining the connection between translation and multilingualism in contemporary literature, she considers its significance for the theory, practice, and publishing of literature in translation. Jones argues that translation does not conflict with multilingual writing’s subversive potential. Instead, we can understand multilingualism and translation as closely intertwined creative strategies through which other forms of textual and conceptual hybridity, fluidity, and disruption are explored. Jones addresses both well-known and understudied writers from across the American hemisphere who explore the spaces between languages as well as genders, genres, and textual versions, reading their work alongside their translations. She focuses on U.S. Latinx authors Susana Chávez-Silverman, Junot Díaz, and Giannina Braschi, who write in different forms of “Spanglish,” as well as the Brazilian writer Wilson Bueno, who combines Portuguese and Spanish, or “Portunhol,” with the indigenous language Guarani, and whose writing is rendered into “Frenglish” by Canadian translator Erín Moure.

You can read more about the book on the Columbia University Press blog:

Does Literature Have to Be Monolingual? Ellen Jones on Minae Mizumura’s An I-Novel and Multilingualism in Translation