The French department and the School of Languages, Linguistics and Film congratulate Laetitia Calabrese, who was voted Teacher of the Year 2014-15 at an award ceremony held at Draper's Hall on Monday.
Published:
28 March 2015 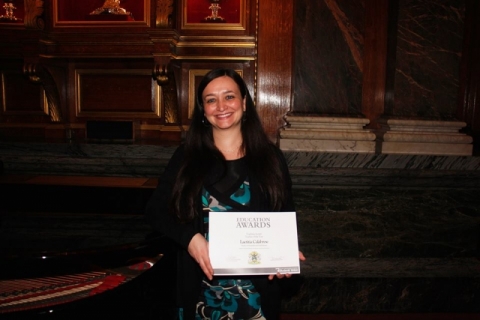 Every year, the Queen Mary Students' Union (QMSU) celebrates the contributions of staff and students to improving the Queen Mary learning experience at the Education Awards. Making up the Education Awards are the Course Rep Awards, awarded to course reps who have made a substantial difference to students and their courses, and the Teaching Awards, awarded to teaching and support staff that have made an outstanding contribution to the student experience.

More photos from the event can be viewed here.