A new study, involving researchers from Queen Mary University of London, has shown that the unique social structure of real-life hunter-gatherers increases the rate at which culture evolves. 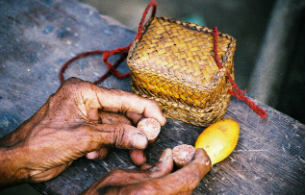 The researchers mapped close-range social interactions of the Agta hunter-gatherers from the Philippines using radio sensor technology over a period of one month. They found evidence of inter-camp migrations and visits on an almost daily basis, revealing a unique multi-layered and fluid social structure in hunter-gatherers.

The team then used mathematical modelling to compare the real social networks of hunter-gatherers with an artificial network.

They found that whilst the artificial networks could spread innovations more quickly, real hunter-gatherer networks ultimately resulted in the development of more complex culture.

To investigate the effect of the distinct social structure found in hunter-gatherers on cultural evolution, researchers used an agent-based model that simulated the creation of a superior medicinal plant product through the recombination of an original set of medicinal plants.

The researchers simulated across the real social network of Agta hunter-gatherers by selecting pairs of individuals based on the strength of their social ties and recombining their ingredients. The new discoveries were then shared with their close family ties.

In the artificial network, a fully connected network of similar size was simulated where all individuals were connected to each other and any discoveries were immediately transmitted to all network members.

Contrary to initial predictions, the rates of cultural evolution were much higher across the real hunter-gatherer social networks than in the artificial networks.

Dr Vito Latora, Professor of Applied Mathematics and Chair of Complex Systems at Queen Mary, who lead the study on the properties of the hunter-gatherer social networks and the mathematical modelling of medical plant recombination, said: “The modular but fluid nature of the social structure of hunter-gatherer societies is key to innovation and the development of culture. Relatively segregated communities (different families, households and camps) promote the independent evolution of multiple medicines, which are later recombined by the fewer encounters across camps to produce the rarest but greatest discoveries."

The ‘social media’ of hunter-gatherers

The unique ability for humans to create and accumulate culture is central to humanity’s success. It first evolved in our hunter-gatherer ancestors and the few remaining hunter-gatherer populations, such as the Agta hunter-gatherers, can provide insights into how it has evolved.

The high mobility of hunter-gatherers allows for thousands of interactions with other individuals over a life time and is very different from the more closely bound societies found in human’s closest relatives, the chimpanzees.

The new study suggests that the high frequency of encounters with unrelated individuals and increased possibilities of cultural exchange in humans are ancestral features of human sociality, rather than an outcome of contemporary new technologies such as virtual social networks.

Professor Andrea Migliano an anthropologist from the University of Zurich and first author of the study, said: “It is fair to say that ‘visits between camps’ is the social media of current hunter-gatherers, and probably of our extinct hunter-gatherer ancestors. When we need a new solution for a problem, we go online and use multiple sources to obtain information from a variety of people. Hunter-gatherers use their social network exactly in the same way. The constant visits between camps are essential for information to be recombined and continuously generate cultural innovations.”