In this blog post, we spoke to Justin Ward, Senior Lecturer in Optimisation, who joined Queen Mary University of London in August 2017. He discussed his research interests, his aspirations while growing up, as well as the things he enjoys the most about working at the School of Maths. He also gave some good advice to students who are thinking of pursuing maths at university. 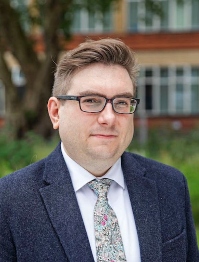 What does your research focus on?

I work in the area of Theoretical Computer Science, which focusses on the study of computation as a mathematical object. My research is mostly focussed on developing and analysing efficient algorithms for approximately solving "difficult" problems. Often these lead to some useful applications in practice. From a larger theoretical perspective, though, the goal is obtaining a fine-grained understanding of exactly what makes certain problems easy or hard to solve with a computer.

How is working at the School of Maths?

There is a great sense of camaraderie and collegiality within the School. In many ways, it feels like being part of a big, weird family. Like any family, we occasionally have disagreements, but we also support and take care of one another. I think having this kind of support has allowed me to become a better and kinder sort of person over the last few years.

Have you always known you wanted to be a lecturer?

No, when I was a child, I don’t think I even knew it was a thing you could be. When I was about 10, I wanted to be an author, astronaut, or inventor. My poor eyesight and fear of heights pretty much ruled out astronaut, I think. When I started university, I completed a BA in English to be an author and a BSc in Computer Science to be an inventor. Along the way, I became really interested in formal theories of proof and automated reasoning, which eventually turned into academic research studying algorithms. I suppose a mathematics lecturer can be viewed as something in between author and inventor, so maybe in that sense, I haven’t actually strayed that far.

What’s your advice to students wanting to pursue a degree in Mathematics?

For some reason, a lot of students are put off or intimidated by proofs, but proofs are really what mathematics is all about. Even though we learn a lot of general procedures for solving problems, mathematics is about more than procedures—it’s about finding out why things work. To get down to the underlying structures and notions that make things "work", you’ve got to be willing to go to the proofs and think things through for yourself.

Interested in studying mathematics? Find out more about our programmes at the School of Maths.