In this week’s blog, we spoke to Dr Rosemary Harris, Reader in Applied Mathematics, who’s been working at Queen Mary since 2007. Currently teaching Introduction to Probability, she discusses her research interests, her teaching style and what it meant to her to be one of the winners of the Queen Mary Education Excellence Award. 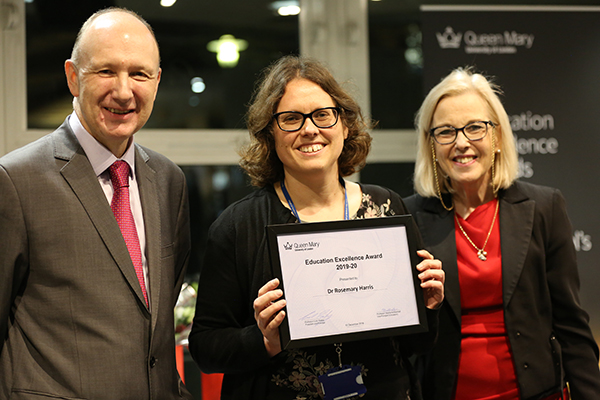 What do you enjoy most about working at the School of Maths?

I am lucky to be surrounded by very friendly people in this department, which makes a very big difference. I also enjoy interacting with students and I am given the chance to spend time working on things that interest me, collaborating with various people both here and in different places around the world.

Tell us about your research

My current research is generally in the area of non-Markovian systems. That’s in the field of stochastic processes – systems that can’t be described exactly but are described in terms of probabilities. Physicists call this type of framework statistical mechanics. Most of the systems people look at probabilistically are systems where there is no memory so you assume that what happens in the future depends on where things are now but not on the history of the process. In real-life systems, of course, memory can have a big role so I have been playing around with simple models and trying to understand how memory affects the dynamics and the probability of rare events and wild fluctuations. Some of that is quite abstract, but some of it has more applications. For example, I work with a PhD student on a project studying how people remember extreme experiences and how they make choices based on their memory.

When and how did you realise you wanted to be a lecturer?

It was a gradual process. I always liked Physics and Maths at school. My mother was a Physics teacher, my father was a French and Spanish teacher so I grew up with no fixed stereotypes of what subjects were suitable for girls and I was always encouraged just to do what I enjoyed. I went to university and studied Physics, focussed on Theoretical Physics at a PhD level and then, after a few years of postdoctoral research in Germany, ended up here.

What does a typical lecture by Rosemary Harris look like?

My classes at the moment are quite big as I teach about 400 students, taught in two different groups with about 200 students in each class. Despite the size of the classes, I try hard to have an element of interaction in them. I normally write on the visualiser as I strongly believe maths is best presented being written in real-time rather than using PowerPoint slides. That way, I believe students can keep up better with what I am saying, they can write notes as their writing is at the same speed as my writing and they see everything as it’s being explained live, which in my opinion is better than simply flashing equations at them. I usually give them plenty of examples and sometimes a couple of minutes to work on some questions or chat with the person next to them. In teaching probability, I also have my favourite giant dice which I like to throw around a bit to hopefully make things more interesting for the class and hold their attention longer.

You have recently been awarded one of the Queen Mary Education Excellence Awards. What did this achievement mean to you?

It was a bit of a surprise, to be honest. I think it’s nice that the university recognises good teaching, which takes a lot of effort. Also, I am aware that there are many other people who are very good teachers. I saw this prize more as a recognition of the hard work that’s been going on at ground level from lots of people. Even in my own course, I was well-supported by other staff and PhD students running tutorials, so the prize is a bit of recognition for them as well.

Any advice to students wanting to study Mathematics at Queen Mary?

I think my advice for them would be to look for things they enjoy and do those. A lot of pressure in the current world comes from thinking about what will eventually lead to a job. Although that’s important, the university is going to take three years of a student’s life so it is important to find a subject that is enjoyable for them. I would advise prospective students to find a course they enjoy and work hard, without expecting it to be easy. Maths is far from being easy! They should be prepared to try to understand it, get their heads around what’s going on rather than simply thinking about passing the next exam. That way they will find the subject more rewarding and succeed in it.

Find out more about studying Mathematics at Queen Mary here.