In this blog post, we spoke to Dr Jamie Griffin, Lecturer in Applied Probability, who joined the School of Mathematical Sciences in September 2015. As well as discussing his main research area, modelling malaria transmission and control, he also told us more about his experience working on statistical methods for infectious disease outbreaks. He also mentioned the work done in collaboration with colleagues from Imperial College on the COVID-19 global pandemic. 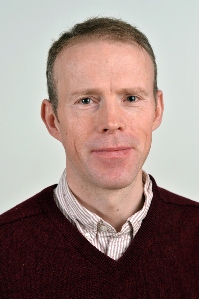 Can you tell us a bit more about your experience advising policymakers at the WHO on a number of questions covering vaccines?

The RTS,S vaccine for malaria was approved for use in 2015, following trials showing that it is partially effective. The WHO wanted estimates of the effect it might have at a population level in reducing the burden of disease due to malaria, to inform their policy recommendations. To help with this, they asked several malaria mathematical modellers to provide estimates and I was one of them. This work involved putting together many different types of data: demographic data from Africa, detailed vaccine trial data and general malaria data; and then trying to make sense of the data using models of malaria transmission. Based in part on this input, the WHO recommended pilot studies rather than going to routine use of the vaccine. I later took part in comparing the vaccine to other interventions, which showed that it's more cost-effective to scale up existing interventions such as insecticide-treated bed-nets, although the vaccine could be useful once this has been achieved.

Your research on the severity of COVID-19 was published in March 2019. Can you tell us a bit more about that?

Before joining Queen Mary, I was in the Department of Infectious Disease Epidemiology at Imperial College for eight years as a post-doc and research fellow. During that time, as well as while at Queen Mary, my research has mainly been on malaria modelling. However, I have also done some theoretical work on statistical methods for infectious disease outbreaks. The department at Imperial College mainly focusses on applied work, including advising governments and public health bodies. During the swine flu pandemic of 2009, researchers from many different projects across the Infectious Disease Epidemiology department, including me, switched to working on swine flu. This was quite exciting to be involved in. Swine flu turned out to be less severe than initially feared - it is a type of H1N1 flu, the type also responsible for the terrible flu pandemic of 1918–20. Based on my past work on infectious disease outbreaks, I had the chance to work with collaborators at Imperial College on the COVID-19 pandemic. The main work that I contributed to estimated what proportion of symptomatic cases or of infections result in death or severe disease. At that time, the data was mainly from China. The overall estimate of infection fatality that we found ranged from less than 0.05% for under 30s to 7.8% for over 80s.These estimates fed into the Imperial College modelling predictions that have been in the news in the past year.

What do you like the most about working at Queen Mary?

My background is in applied mathematical modelling and statistical work, but I like that at Queen Mary there are colleagues with backgrounds in theoretical areas, too.

Have you always known you wanted to be a Lecturer?

Since starting academic research, I have wanted the independence to carry out my own research on whichever topics are the most interesting and productive, and a lectureship at the School of Maths allows me to do that.