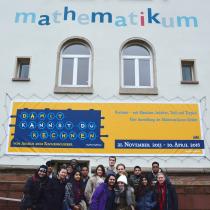 Last week, 20 members of the Maths Society travelled to Germany for an organised Maths-themed trip. The students stayed at a youth hostel in Giessen, from which they explored the city. During their stay they had the opportunity to visit Greifenstein Castle and Mathematikum; the world's first hands-on mathematics museum containing more than 150 exhibits, which open a new door to mathematics.

The strength of the Mathematikum(link is external) is presenting scientific phenomena in interactive, exhibits with the opportunity to solve puzzles, build bridges without using any tools, see yourself mirrored to infinity, stand in a giant soap bubble and lots more. As well as enjoying the educational exhibits of the museum, they also had the opportunity to sample some of Giessen’s local delicacies including waffles.

Next on their itinerary was Frankfurt where students joined the Frankfurt on Foot Tour, exploring highlights like The Old Town Square, The Book Burning Memorial, Alte Nikolai Church, a Jewish Holocaust Memorial Wall and much more. The tour finished at the top of the Main Tower which has a famously fantastic view of Frankfurt’s skyline. And of course no trip to Germany would be complete without enjoying traditional Schnitzel, German sausages and local beer. The trip was a great success and the Maths Society hopes to organise more trips in the future.