This term we welcomed our largest ever cohort of PhD students, following substantial investment in PhD scholarships within the School. 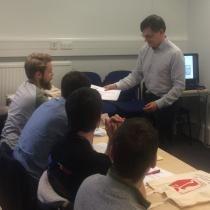 At the induction event, two new students, Lewis Mead and Kieran Ryan, received the School’s annual Ian MacDonald award in recognition of their outstanding research proposals. This £1000 award is named in honour of Professor Ian McDonald, a former member of the School reknowned for his contributions in a number of mathematical fields.