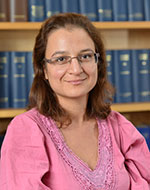 Christiana has published extensively in the area of EU and International Tax Law and is considered a leading expert in her field. Christiana’s book titled European Union Corporate Tax Law is one of the first books in this area. The first edition was published by Cambridge University Press in 2013 and the second edition in 2021. Christiana is also the author of the book titled Advanced Issues in International and European Tax Law, which was published by Hart Publishing in 2015. This book was cited by the US Treasury in its White Paper on the European Commission’s State Aid Investigations into Transfer Pricing Rulings. Furthermore, Christiana is the co-editor of the Research Handbook on European Union Taxation Law which was published in 2020 by Elgar Publishing.

Christiana studied at Oxford University for her BA in Jurisprudence and for the BCL. She also has a PhD from the London School of Economics. She is a solicitor of England and Wales and an advocate of the Cyprus Supreme Court. Before joining Queen Mary, Christiana worked for Allen and Overy LLP. Christiana is also a member of the Law Society of England and Wales, and the Cyprus Bar Association.

She has also completed PhD supervision with the following students: