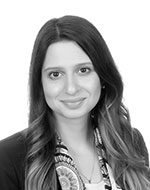 Mary is the Academic Lead for Executive Education at the CCLS contributing to the training of industry professionals. She delivers training programmes for practitioners, government officials, and courts. She has also led and worked on projects by the European Bank for Reconstruction and Development and other international institutions.

Mary has experience with arbitral practice in civil and common law systems and has worked on international arbitration cases (LCIA, ICC, HKIAC, ICSID). She is admitted to practice as an Attorney (Thessaloniki Bar Association) and she has also served in the past as Special Legal Advisor at the Greek Ministry for Development advising on issues relating to competition law and Entrepreneurship.

Mary is a Permanent Contributor of the Kluwer Arbitration Blog and an Associate Editor of the Chartered Institute of Arbitrators’ International Journal of Arbitration, Mediation and Dispute Management.

Mary’s main research interests are in the area of international arbitration and investment law including decision-making of arbitrators, legal reasoning of awards and decisions, application and interpretation of the law, the role and function of precedent, judicial dialogue, customary international law as well as general principles of law.