‘Restitution - The Return of Cultural Artefacts’, published by Lund Humphries, is 'the first balanced, up-to-date and accessible overview of the complex issues surrounding the restitution of cultural property'. 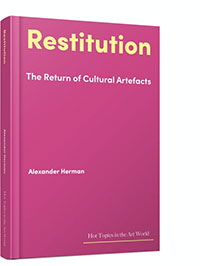 Alexander Herman is Programme Co-Director of Queen Mary’s Art, Business and Law LLM (at the Centre for Commercial Law Studies) and Director of the Institute of Art and Law.

Debates about the restitution of cultural objects have been ongoing for many decades, but have acquired a new urgency recently with the intensification of scrutiny of European museum collections acquired in the colonial period. Alexander Herman’s fascinating and accessible book provides an up-to-date overview of the restitution debate with reference to a wide range of current controversies.

This is a book about the return of cultural treasures: why it is demanded, how it is negotiated and where it might lead. The uneven relationships of the past have meant that some of the greatest treasures of the world currently reside in places far removed from where they were initially created and used. Today we are witnessing the ardent attempts to put right those past wrongs: a light has begun to shine on the items looted from Asia, Africa, the Middle East, the Americas and the Pacific, and the scales of history, according to some, are in need of significant realignment.

This debate forces us to confront an often dark history, and the difficult application of our contemporary conceptions of justice to instances from the past. Should we allow plundered artefacts to rest where they lie – often residing there by the imbalances of history? This book asks whether we are entering a new 'restitution paradigm', one that could have an indelible impact on the cultural sector - and the rest of the world - for many years to come. It provides essential reading for all those working in the art and museum worlds and beyond.

Find out more about ‘Restitution - The Return of Cultural Artefacts’.

‘A fascinating and insightful overview of the historical, ethical and legal landscape of restitution, in theory and practice. Herman provides much needed context and scholarly analysis to such an important debate in today’s cultural sphere.' - Dr Tristram Hunt, Director, Victoria and Albert Museum

‘A penetrating analysis of the most pressing problems arising from the need to repair the fracture of cultural treasures from their historic origins; an essential guide for all who care about justice and art with a range and impact out of all proportion to its brevity.’ - Sir Alan Moses, Joint Chair of the United Kingdom’s Spoliation Advisory Panel and a former Lord Justice of Appeal