CCLS-Bank of England Conference explores the theme of 'Borders' 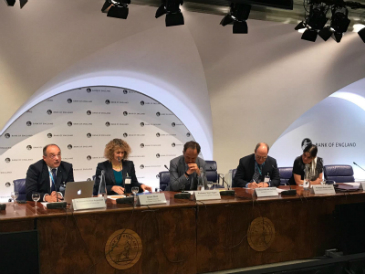 On July 4, the Bank of England hosted the sixth annual CCLS-Bank of England conference under the auspices of the Institute of Banking and Finance. The conference explored the theme of Borders, considering three dimensions: regulatory perimeter, cross border and cyberspace.

As regards the regulatory perimeter, the financial crisis highlighted the challenges that can arise at the border of regulation – between the regulated and the unregulated – with risks from the shadow banking sector reverberating through the regulated sector – and also between the classification of different types of regulated activity – for example with risks being restructured to migrate between the banking book and the trading book in ways that materially changed their regulatory consequences and therefore the risks that institutions were taking.

Both areas highlighted that where there is a significant difference in the consequences of falling on one side of the border or another, the pressure on the definition of the border is likely to become particularly intense.  It is therefore important to think carefully about where we draw those borders and the differential consequences of falling on one side or other of them.  This will allow us to test whether the boundary is drawn in a way that justifies that differential effect – or - whether the differential effect is appropriate given the boundary that has been drawn.

As regards the cross border dimension, the financial crisis also inspired policy reactions – such as the expansion in the number of resolution regimes for financial institutions and the introduction macro-prudential authorities, who can look across the borders and challenge where they are drawn and the consequences of falling on either side of those borders.  These innovations, in turn, have created new boundaries between different authorities within jurisdictions, with the need for a clear allocation of responsibilities, tied with close cooperation and information exchange to ensure regulation is efficient and that risks do not fall between two stools.

The financial crisis was of course also global, reflecting the global nature of many firms and markets.  Globalisation puts particular focus on the boundaries between jurisdictions – in practice, the powers of different countries will often overlap when faced with global businesses - how they coordinate and cooperate can have a significant effect on the impact of those borders – and how businesses and products grow in the first place.

As regards the third and most novel dimension, the crypto, virtual or cyberspace, the field of fintech/regtech is evolving rapidly.

Looking forward, new technologies are creating opportunities to structure products and services in ways that challenge the traditional borders in financial services – whether by allowing the disaggregation of services or the creation of entirely new products.

In response to last month’s report on the Future of Finance, lead by Huw van Steenis, the Bank of England has confirmed the need to make a strategic pivot in its approach to horizon scanning and monitoring the regulatory perimeter, to focus more on financial innovation and evolutions in the UK financial system. To keep ahead of new risks, the Financial Policy Committee will use its annual review of risks beyond the core banking sector to evaluate changes in the shape of the UK financial system, including new business models or interconnections. Across the Bank, continued close monitoring of developments and analysis of such innovations will take into account new opportunities and benefits to the UK financial system as well as the possibility of new risks.

It is also particularly timely that this conference comes hot on the heels of the recent announcement of Libra, a proposed new type of crypto asset.  Wrapped up in a single proposed product are a host of interesting questions about the appropriate boundary between the regulated and the un-regulated, different types of regulated products, the role of different authorities in each jurisdiction and the role of the authorities in different jurisdictions. Libra promises to provide an alternative to more traditional forms of payment.