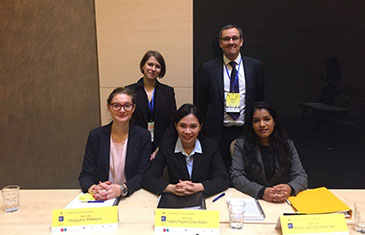 The QMUL team pleaded in the European Regional Round in Cluj-Napoca, Romania from 10 to 14 of March 2017 against thirteen other European universities. Considering that this is the first time that QMUL participates in this event, the team did very well, reaching the fifth place in the oral pleadings, only narrowly missing the chance to classify to the final round at the WTO Headquarters in Geneva.

Taking part in this competition is hard work, but the rewards are immense. Students benefited from enhancing their analytical, research and advocacy skills, deepening their knowledge of international trade law and boosting their career prospects by pleading in front of partners or senior counsels from leading law firms and international organizations that recruit experts in this area of law. The testimony from some of the team members sheds light on the magnitude and impact of this event:

“When i started my LLM, I immediately looked into the different moot competitions available for QMUL LLM students. I was attracted to the ELSA WTO Moot Court Competition because I had already written a dissertation on a WTO topic for my masters degree in Belgium. I haven not regret my choice. My team was very diverse and we got a long very well. Dr Gari and Dr Potocnik were hands-on coaches. Even though we did not qualify for the final round in Geneva, we did very well in Cluj-Napoca - where the European Regional Round was held this Year. As former mootie, I can only recommend future students to take part in this competition. The added-value is huge and it is also something different from the day-to-day school courses. It is hard work, but it is very rewarding.” - Morgane Willekens, LLM in International Business Law 2016-17.

“I was drawn to ELSA WTO Moot because I was interested in international trade law and advocacy. I have grown personally, academically, and professionally by participating in the WTO ELSA Moot. The competition encourages teamwork and fosters legal research skill as we were presented with a complex moot case on WTO law. It was also an opportunity to learn beyond what is taught in the LLM programme as we were able to meet and learn from experts and legal practitioner. Moreover, mooting improved my advocacy skills because we had to present both written and oral arguments with precision, confidence, and persuasiveness. The oral submission is the most challenging and important part of the competition. Many WTO experts attended as panellists in the European Regional Round in Cluj-Napoca, Romania. We had to engage and respond to their questions as we were presenting our legal arguments. It really helped me to consolidate the knowledge I had acquired in legal research and advocacy training. QM Team Members received lots of support from our coaches. I was also happy to meet other team Members, we have grown closer both as friends and mooters. Participating in the ELSA Moot involved a lot of work but it was one of the one of the most rewarding academic experiences during my LLM study at QM. I gained more confidence and became more astute.” - Pulkeria Proprieta Dewi Ekaristi, LLM in International Economic Law.