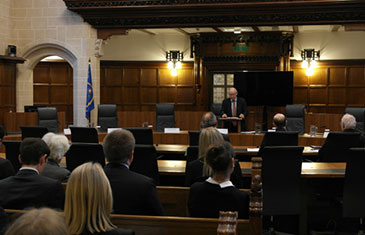 London, 9 December, 2015: The Centre for Commercial Law Studies (CCLS) held a major event on Friday 4 December to explore the most important judgments of the UK Supreme Court with regard to commercial and private law.

As the third in a series of periodic conferences organised by CCLS, the event, which took place at Court Room 1 at the UK Supreme Court, drew together a wide range of high profile and distinguished speakers including Lord Neuberger, President of the UK Supreme Court – who delivered the keynote address.

In an incisive address, Lord Neuberger spoke about the relationship and differences between academic lawyers, practising lawyers and judges - with particular reference to the UK Supreme Court. He discussed issues relating to senior judges writing judgments and subsequently commenting on those same judgments. He also spoke about the role of the UK Supreme Court, including a comparison with other European courts, as well of the evolution and future development of the Court.

According to Professor Brekoulakis: “What was special about the event is that its topics cut across different areas: sovereign immunity, tax, financial law and insolvency, commercial contracts. Usually, conferences tend to focus on one subject matter, but we deliberately took a broader approach and focused on the significant developments of UK Supreme Court jurisprudence on a number of important areas. The general theme that unified the topics is public interest and public policy.”

The theme of the conference was inspired by the 800th anniversary of Magna Carta. The event was part of the continuing focus of CCLS on the jurisprudence of the UK Supreme Court.

About the Centre for Commercial Law Studies (CCLS)