Six PhD students from Queen Mary University of London joined doctoral students from across the globe to take part in the ATLAS Agora 2015, a series of workshops designed to foster the study of legal issues in a global context. 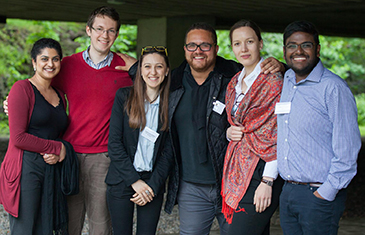 The ATLAS Agora was held at the University of Montreal, Canada in June 2015, and is an annual two-week event run by the Association of Transnational Law Schools (ATLAS). Students hear from faculty in a variety of fields and give and receive feedback on each other’s work.

‘This is the second year Queen Mary has sent students to the annual Agora – an intensive, two-week doctoral training workshop for doctoral students from all the ATLAS members. By all accounts, the University of Montreal put together a rich and diverse set of lectures and workshops for students, including a cultural programme.

‘It’s a fantastic opportunity for our doctoral students to not only learn from world-leading academics, but also to get feedback on their work-in-progress, and to meet other doctoral students around the world interested in researching law in a global context.’

Queen Mary joined the Association of Transnational Law Schools ATLAS in 2014 and is the only UK partner. The other university partners in ATLAS are American University Washington College of Law, Bar Ilan University, Bucerius Law School, Erasmus University Rotterdam, Osgoode Hall Law School and the National University of Singapore.

In particular ATLAS encourages the study of the comparative legal and regulatory responses to globalisation; the evolution of transnational law; and the challenges involved in international governance.

‘Being involved with other PhD Students who research in similar areas to mine has provided me with a good picture as to how others will contribute in the academic world. It is an opportunity that every researcher commencing his/her PhD should embark upon, since it is a distinguished experience. I was glad to be there as I made some really useful connections from the shipping industry which relate to my area of research.’

‘The workshops focused less on the specifics of our research areas and more on our writing and communication skills. This I found particularly useful as I wanted some feedback on my argument flow, etc. To this end, it was very useful that my co-participants in the workshop were not experts in my field of research. Similarly, the feedback of the animator was also very useful.

The lectures were scheduled in the mornings and afternoons so that we had some time in the evenings for sightseeing (weather permitting) and networking. The visits to the Town Hall, Archaeological Museum and Court of Appeal were a real treat, and the dinner cruise was a perfect ending to the Agora.'

‘It was overall a very useful and thought provoking workshop which brought together a lot of talented researchers in law from around the world. We will stay in touch and hope to establish closer links personally as well as institutionally.

The speakers were predominantly from the University of Montreal and their presentations were to the great majority of very high quality. I have definitely benefitted from the lectures and have taken some good points for my own research.’

‘It was undoubtedly a challenge for the organisers to come up with a set of lectures that would cater to the needs and interests of a diverse cohort of people who write about different areas of law and are at various stages in their PhD projects. In my opinion, the Agora managed to strike the balance between, first, featuring some talks on methodological issues that are relevant to many and, second, including substantive presentations on the lecturers’ current research.

In the writing workshop that I attended the moderator, Matthew Harrington (UdM), was immensely attentive and helpful. He engaged with the substance of the writing piece in considerable detail and also provided useful comments and advice on the research process. In fact, I think that the writing workshop was the highlight of the Agora.’

'The program also included an array of social programs which included a visit to the Town hall and the Court of appeal of Quebec City. The social program was educational and gave a insight in to the judicial system of Canada. I very much enjoyed the mini lecture given by Judge Mr. Allan Hilton. He was able to relate the judicial system to other judicial systems and paint a complete picture of not only how the system works but also about the life of a judge. I must say this motivated me to consider it as a potential career option after the PhD.'

‘The lecturers emphasised inter-disciplinary aspects of their research topics and encouraged us to contribute to the discussion from the perspective of our own field of study. I was particularly interested in Professor Mackaay’s lecture on ‘Law and Economics – a toolkit for research on law’ and Professor Rousseau’s seminar on ‘Law and Finance’. However, in the end I realised that all seminars were very useful as they touched upon thought-provoking issues.’