Businesses and extractive industries should communicate openly and engage more effectively with society, according to the former CEO of British Petroleum (BP), who was speaking at the launch of QMUL’s Energy and Natural Resources Law Institute. 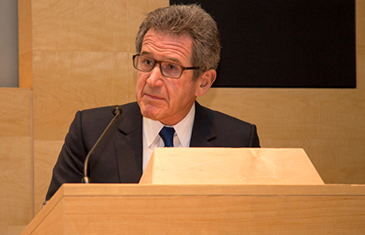 Recognising that around the world ‘barely half the population trust energy companies to do the right thing’ - a figure that reduces to less than a third in the UK - Lord Browne set out a number of key points which, he argued, would improve the reputation and public perception of the industry.

“I am an optimist, and believe it is possible for the extractive industries to improve permanently their relationship with the rest of society,” he said.

Lord Browne went on to recommend that businesses acknowledge and study failure, embrace strong and smart regulation, communicate openly with society and that leaders should examine deeply the purpose of their business activity.

He added: “The next generation of corporate leaders will have to spend more time than ever on defining, communicating and enacting their companies’ core purpose.”

“Business is the engine of human progress, but it can only fulfil that role if it has a harmonious relationship with those it serves.”

The lecture formally launched the new Institute, based at QMUL’s Centre for Commercial Law Studies. The Institute is built on four pillars: law, policy, regulation and governance, while considering corporate, economic, social and environmental concerns. It will develop into an international centre for discussion and research and energy law.

James Dallas, Executive Director of the new Institute said of the Lecture, "Lord Browne provided a spectacular curtain raiser for the Institute - offering great insight and clarity on the challenges facing energy companies and their leaders".

Regarding the establishment of the Institute he added “Very few universities focus on the research and study of energy and natural resources from a legal perspective.”

“The energy industry raises many challenges both politically and technically, from exploration and production of fossil fuels in deep waters to fracking onshore and from nuclear power generation through to the generation of wind, wave and solar power. It is essential that all involved - governments, energy companies, lawyers, economists, policy makers and the public - engage in debate on the major issues facing the sector.”