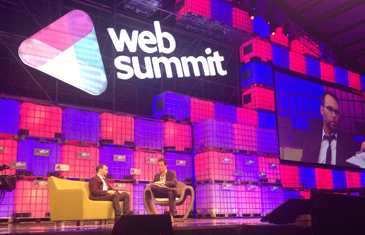 Katerina Sedlata, qLegal student adviser, attended and provided a summary of the event:

The fifth Web Summit that took over Dublin for three consecutive days has now finished and it has left us at qLegal full of great new experiences, incentives, ideas and more importantly curiosity and even higher expectations for 2015.

The event could be characterised in many ways according to the personal or professional interest of each participant, but its primary target audience was:

Most people may have perceived the Web Summit as a networking event. Networking opportunities were provided not only during the day while start ups were able to introduce their projects at their allocated stands to passersby, but anyone could have also taken advantage of the well organised Night Summit moving from one part of Dublin to another, taking over a different part of the city each night.  However, the event also served another purpose – it provided encouragement, advice and guidance through chosen guests giving prepared talks or conducting interviews with editors of some of the most well-known newspapers and magazines such as Forbes, The Financial Times, The Wall Street Journal and The Economist.

Before we start drooling over the excellence of some of the speakers, we would like to make sure the Pitch Competition presented by the Coca Cola Company does not go unnoticed. Over the three Summit days, the best 200 startups got a chance to present their projects to panels of investors and on the last day, the three best startups from each category (seed and early-stage companies) faced the challenge of pitching their ideas to an audience of thousands of attendees at the Center Stage competing for prize money and access to Coca Cola’s resources (which may arguably be even more desirable than cash). If you thought that all cool and profitable ideas in the world are already taken, you were by far mistaken like some of us.

The seed company winner, BaseStone, was by far our favourite considering their presentation skills and a very down-to-earth and practical approach. BaseStone is a table and web-based collaboration tool for professionals in the construction industry. Mimi, a smart hearing technology ecosystem centered around hearing enhancement algorithms and a machine learning platform that combines information from all of the places where Mimi’s technology is deployed, was a very persuasive runner up.  A truly current winner in the category of early-stage companies was Codacy with its automated code review tool that allows developers to save time and improve code quality with analytics on every commit.  The company placed second proved that regardless of how much attention 3D printers already get, there is still room for improvement and expansion into new industries. re:3D is an Austin-based startup pushing the limits of 3D printing worldwide particularly with their flagship product Gigabot, which is the world’s largest, affordable, industrial-grade 3D printer.

One thing we did not expect from the Web Summit was the abundance of tasty local food as part of the geek experience. The downside was that to appreciate the great Irish ingredients flawlessly combined into traditional meals, you would have to bear to walk away from all the busy stages devoted to talks and interviews on marketing, investments, entrepreneurship and other topics and enter the peaceful Herbert Park. But if you did manage to break away, it provided a perfect way to recharge before entering the tech buzz of the Summit again.

It is almost impossible to enjoy all the perks of the Web Summit in the three days, so our goal was to at least try to make the most of it. Having a quick look at the Marketing Stage while Emmanuel Seuge, the ‎Vice President of Global Alliances and Ventures of The Coca-Cola Company and David Butler, the Vice President of Innovation + Entrepreneurship of The Coca Cola Company were explaining how The Coca Cola Company paired up with start up companies such as Spotify or Misfit and explaining how they are constantly looking for mutually beneficial partnerships, we then spent most of our time at the Centre Stage.

Dana Brunetti, the producer of The Social Network or Captain Philips shared his behind the scenes stories from negotiations with Netflix about the release of the House of Cards series and said he wished the film distribution industry would enable the spectators to decide how and where they want to enjoy a newly released hit instead of forcing them to either go to the movie theaters or having to wait for a DVD release.

A highly motivational talk given by an Irishman Paul McGinley, the captain of the European Ryder Cup team, focused on the importance of keeping a positive mindset and was a refreshing change to all the voices from Silicon Valley heard before and attracted many golfers in the audience. As Paddy Cosgrave kept reminding us at this point, the Web Summit was slowly coming to an end awaiting the grand finale conducted in style by another great Irishman – Bono from U2, who quite expectedly managed to overshadow the other three interviewees of David Carr, journalist from The New York Times. Appearing strangely nervous at first, Bono proved he can not only sing on stage, but also engage in a discussion on the place of music in the 21st century.

As in every big event, there are always glitches, which was the case with an extremely poor Wi-Fi connection in the Centre Stage area, but overall we would call this year’s ‘Davos for Geeks’ as referred to by The Guardian, a huge success and an eye-opening couple of days.