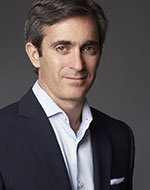 Geronimo Frigerio is an international specialist with twenty years’ experience in the design and execution of economic and social development projects in Latin America. He is an expert in business regulations, investment structuring and reform programs.

He is the General Director of gf Consulting Group, a consulting firm specialized in providing governments, companies and multilateral development banks expert advice on investment strategies and projects. As former President of the Board of Executive Directors at Fonplata, Specialist-Attorney at the Inter-American Development Bank and World Bank “Doing Business” team member, he holds relevant international experience in the fields of law, finance and economic development.

Geronimo has been actively involved in law and policy reform in Latin America and the Caribbean for many years, having made a considerable impact in several countries, particularly Haiti, Bahamas, Guatemala, Honduras, Brazil, Peru, Venezuela, Uruguay, Argentina, Belize, Chile, Bolivia, Colombia, Nicaragua, Mexico, Costa Rica, Ecuador, El Salvador, Panama and Paraguay. Examples: (i) Haiti: involvement in rebuilding the country after the earthquake of 2010 through education and transport sector policy reforms; (ii) Panama: design of the regulatory framework for the expansion of the Panama Channel; (iii) Bahamas: redesign of the sovereign financial architecture; (iv) Latin America and the Caribbean: proposal to the presidency of a multilateral development bank to innovate in the overall portfolio management to boost project execution and improve development effectiveness.

He has recently published a book with policy measures that can be applied to reduce poverty and enhance growth by removing red tape and simplifying laws and regulations, with a focus on small businesses. The book is titled "Simple – and idea to transform the future of Latin America" (Penguin, 2020) and has been ranked as a top 10 bestseller in business books in the region (including Argentina and Mexico).

“Simple” propose the following reforms to boost economic development: (i) Simplify business regulation for small firms (99% of the private sector in Latin America that create 60% of jobs); (ii) Digitalize public-private interaction at the mobile phone level (since there is connectivity at such a level); and (iii) Adopt a regional approach to business regulation so that small firms can expand their scope for doing business (build a 650MM people market).

The implementation of “Simple” aims to unleash the potential of the private sector, not just big firms: Latin America mostly rely on the 1% of big firms that contribute to 75% of the regional income. “Simple” proposes to boost the remaining 99%. “Simple” proposes even expanding such a 99% to those informal as well.

“Simple” proposed reforms are already being implemented in Belize in coordination with the Inter-American Development Bank. Adoption is already being considered in other countries. “Simple” is a proposal with a regional approach designed to be escalated at a global level.

“Simple” has been endorsed by: (i) Andrei Shleifer, Harvard University (#1 Economist in the world according to the IDEAS/RePEc ranking); (ii) Daniel Runde, Center for Strategic and International Studies (leading policy Think Tank in the USA); and (iii) Simeon Djankov, PIIE and LSE (former Ministry of Finance of Bulgaria and World Bank´s Doing Business creator). In addition, CNN´s Andres Oppenheimer presented “Simple” as a new “recipe” for poverty reduction.

Geronimo has published a summary of the policy proposal in the Harvard Review of Latin America and did a webinar with the Institute for Global Law, Economics and Finance (IGLEF) at CCLS.

Geronimo is a true ambassador of Queen Mary’s values and has made a real impact on the ground, contributing to expand the scope of policy reforms and their implementation in the lives of millions, with a focus on the promotion of private sector development, jobs creation, facilitating access to formality and poverty reduction.