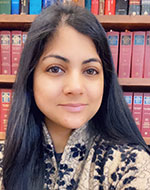 Meenakshi Slathia is one of the leading lawyers of the Union territory of Jammu and Kashmir.

She started practicing with her father at a very young age of just 13 years only. At the time, she took dictation from her father Shri B S Slathia, Senior Designated lawyer and was also President of J& High Court Bar Association Jammu.

She has worked hard to achieve the sustainable development goals also known as the SDGs as determined by the United Nations, beginning from the grassroots level by conducting camps and arranging interactive sessions with the students in the State.

Meenakshi has been an educationist self and always strived to achieve more and more in the field of education. She believes in the power of literacy and to educate herself further, she studied the Criminal Justice LLM at Queen Mary University of London after eight years of practicing law at Jammu and Kashmir High Court. She was the first in her family to study for an LLM.

Her main aim was to learn about international criminal law and the intricate working of different criminal justice systems of the world. During her masters at QMUL she remained the course representative for her specialism and she organised around eight events which included one that was sponsored by the MP of Walthamstow.

After completing her Masters in law she came back to India and resumed her practice.

At present she is practising law at the High Court and District courts of Union territory of Jammu and Kashmir and Ladakh, where she has been working closely with matters related to constitutional law, criminal law and Family law. Recently she has earned a landmark judgement in a criminal case, which was reported widely in the State. For the first time in the history of the State, she has filed a domestic violence case on behalf of a male against his wife. This has become the first of its kind to be filed and the same is pending before the Competent Court of Law. She has more than 50 judgements reported in the national and State-level journals and law digests. Apart from this, she has been doing pro bono litigation as well to help the poor who cannot afford a lawyer. Her mission in life is to get justice done, not only seen to be done and her journey has just begun.