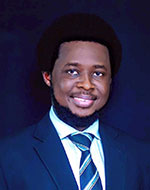 The Commissioner, Anti-Corruption Commission of the Republic of Sierra Leone

Francis Ben Kaifala is the current Commissioner (Head) of the Anti-Corruption Commission (ACC) of the Republic of Sierra Leone. He is the President of the Network of Anti-Corruption Institutions in West Africa (NACIWA) and an elected Board Member of the African Union Advisory Board on Corruption (AUABC). He lectures part-time Commercial Law at Fourah Bay College, University of Sierra Leone.

The young Commissioner came into office in June, 2018 with a solid academic and professional background as a lawyer, and promised a robust fight against corruption. True to his promise, immediate steps were taken aimed at fulfilling the above promise and the results have been remarkable and exceptional. At the time he took over, Sierra Leone was performing very badly in all global indexes on corruption. For instance, Sierra Leone was in a failing position of 49% in the Millennium Challenge Corporation’s Control of Corruption Scorecard. Under his leadership, the country moved to a respectable pass of 71% in 2018, a further 79% in 2019, 81% in 2020 and an excellent 83% in 2021. This has made Sierra Leone pass that Scorecard four years back-to-back for the first time in its history and has been selected for the Multi-Million Dollar US Government's Compact award. Today, Sierra Leone is one of the top ten performers in the Lower Income countries - a sign of commitment to controlling corruption over a period of four years since he became commissioner.

Moreover, Sierra Leone has registered its highest ever scores since the establishment of the Transparency International Corruption Perception Survey - Sierra Leone scored thirty-four (34) – compared to the country’s stagnant score of thirty (30) points in the preceding three years to his appointment (2016, 2017, and 2018); and jumped 15 places upward from 130 in 2017 to 129 in 2018, 119 in 2019, 117 in 2020, and now ranks 115 in 2022 in the TI's Global Country Rankings. The country’s latest scores in the last two years eclipsed the average scores for sub-Saharan Africa for two years in a row for the first time ever.

Commissioner Francis Ben Kaifala has introduced far-reaching reforms in ensuring accountability in public life. The new reforms he promulgated and spearheaded are believed to be among the strongest anti-corruption legislative reforms in Africa.

Under the Non-Conviction Based Asset Recovery, the Anti-Corruption Commission has recovered over Le35,000,000,000.00 (Thirty-Five Billion Leones) in than 3 years - which represents more than twice all recoveries ever made by the ACC in its 18 years prior existence combined before his ascendency into office. He has also introduced the Special Anti-Corruption Division of the High Court, with state-of-the-art paraphernalia and resources to exclusively try corruption cases which has resulted in a very high rate of convictions for corruption. He also introduced the Fourth Generational National Anti-Corruption Strategy which is rated "very strong" and is believed to have the right blueprint for effective corruption control in Sierra Leone.

Francis Ben Kaifala’s model for the fight against corruption, his fearlessness, tenacity and bold approaches have helped position the country on the firm path to consistently and sustainably control corruption; and sets a new trajectory for accountability, effective service delivery, democratic good governance and transformative development. This exceptional leadership and results have brought him multiple local and international awards or recognition including being honored by the Department of State of the United State of America as one of 12 “International Anti-corruption Champions” in February, 2021. He was also named in 2021 as one of "100 Most Influential People of African Descent" by the UN/MIPAD Initiative among dozens of others.