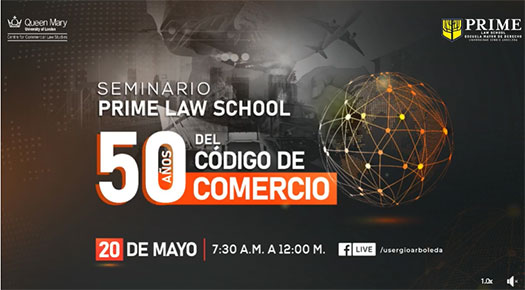 The CCLS Colombia Chapter is a group of alumni in roles with a very important leadership in Colombia. Among its graduates are currently partners from major law firms, senior government officials, Vice Minister of Commerce, renowned academics in the areas of intellectual property, international business law, national and international arbitration legal tech and digital law and a good number of arbitrators and secretaries of arbitral tribunals, which are very prominent in Colombia. This group of alumni has been working in Colombia even before the CCLS Colombia Chapter became officially. Since 2012 they have worked in different highly prestigious social and academic activities.

Dr Germán Darío Flórez Acero, (Intellectual Property Law LLM, 2011) leads on the activities of the Colombia Chapter. He is supported by a committee.

In the year 2021, two months after the official launch of the Chapter and amid the global pandemic, the CCLS Colombia Chapter held the most important event in the country to celebrate the 50th anniversary of the Colombian Code of Commerce by organising a webinar for the occasion. As well as being on Zoom, it was also live streamed on Facebook. It was more than six uninterrupted hours of conferences with 18 speakers of the highest level. Among the speakers there was Loukas Mistelis, Professor of Transnational Commercial Law and Arbitration, CCLS, who is a world figure in arbitration. He was accompanied by prominent academics and arbitrators such as Professor Pilar Perales Viscasillas from the Carlos Tercero University of Madrid, as well as figures from Colombian law. We had the opportunity to have the Superintendent of Companies and his predecessor, who created the current corporate model in Colombia SAS, the director of the Center for Arbitration and Conciliation of the Chamber of Commerce of Bogotá, the Director of the Copyright Directorate of Colombia. In addition, several CCLS alumni who are in prominent fields of business law, arbitration and intellectual property participated as speakers. The event also had a gender balance invited, reaching the importance of the empowerment of women in the leadership of commercial law.

There were more than 500 participants throughout the day and on the Facebook livestream there were 100 comments and since the event 2.9k views.