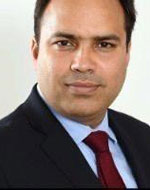 Ajit is a dual qualified lawyer and started his legal practice by setting up operations for the first major Indian law firm in the UK. Being managing partner of the firm's London office, he has substantially grown the practice and has been hired as consultant as a popular British Member Parliament and also former Judge of the Royal Court of Justice. After running the operation of the Firm, he joined a prominent British Law firm and set up their India desk in London. Since 2008 and until now, Ajit has worked extensively between India and the UK business corridor and promoted investments in both countries.

Ajit is a British Solicitor and is also India qualified Advocate and has been partner and senior partner at some of the top tier Indian and international law firms.

Being dual qualified, he has many years of experience leading international M&A transactions and other commercial transactions between India and UK & Europe. His practice is broad and has extensive experience in assisting his clients in all aspects of their legal requirements. He is well-reputed and respected both within the Indian and British market.

Ajit has represented various Indian companies, expanding operations in the UK and Europe and has also acted for international companies investing into the Indian market.

He is also founder and Chair of UK-India Legal Partnership, Special Economic Advisor to the City of Magdeburg (Germany) and Chairman of the Indian CEO’s Forum. He is Chair of the CCLS India Chapter.

One of the Chapter’s members says "Ajit has been working extremely diligently to maximise the Indian chapter's outreach and conducts several informational events in a year which not only helps alums but also prospective QMUL students. He has done a wonderful job at unifying the Queen Mary community in India".

He has welcomed the Indian students from the batch of 2022 and has taken the initiative to form a community within the present batch of Indian students prior to them becoming alumni. He has taken the initiative to get to know the students personally and extend a helping hand to them with respect to approaching their academic courses well. He has also been very active with arranging networking events for the CCLS India chapter.

Ajit has always shown a wonderful and sincere commitment to CCLS and Queen Mary. More importantly his commitment and pride for his alma mater is positively infectious. The Chapter has grown and shown great strides in just one year under his leadership. He has a personality and warmth that exemplifies the values of Queen Mary.