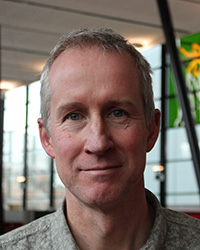 Jürgen Groet was born in Purmerend (The Netherlands), and studied in Beverwijk at the hogeschool Alkmaar. He worked for 4 years in Leiden as a research technician in a plant molecular biology lab, studying homologous recombination in higher plants. In 1994, he joined the team of Dean Nizetic at the Centre for Applied Molecular Biology, School of Pharmacy, University of London. There, he finished his PhD in January 2000, studying human chromosome 21q11. He worked as a post doctoral researcher in the same lab. From June 2001, he moved to Barts and The London School of Medicine and Dentistry, Queen Mary University of London, where he is currently working as a Reader in Molecular and Cellular Biology.

Dr Jurgen Groet main interest is in studying Down syndrome (DS) using induced pluripotent stem cell (iPSC) models which are generated by the Nizetic/Groet research group. iPSC clones are differentiated into different cell types to do research on phenotypes of DS. Special DS phenotypes of interest are: leukaemia, Alzheimer’s Disease, and neuronal malformations.

Additionally, there is a substantial involvement in teaching which includes teaching of medical-, BSc-, and MSc students.

Academic coordinator for the Intercalated BSc in Experimental Pathology

The long term research theme of Dr. Groet, is the study of chromosome and gene dose effects (aneuploidy and haploinsufficiency) on cellular functions, specifically the phenotypic features of Down syndrome (DS), caused by just one extra copy of perfectly normal, chromosome 21. The homeostasis of cellular proteins is significantly disturbed by an overdose of chromosome 21 genes and non-genic functional elements, causing multiple effects through poorly understood mechanisms: fewer (neuronal) cells are formed, they form fewer and hypo-functional synapses, neurons undergo Alzheimer's degeneration extremely early in life, heart endothelial cushion cells fail to close the septum, cells are much more resistant to dividing out of control and becoming cancer cells, the latter is true for most tissues except some haematopoietic lineages and spermatogonia, which are more prone to malignancy. From these facts, it is clear that much could be learned about cell proliferation, cell differentiation, neurodegeneration, and the protection from cancer, by identifying the molecular pathways and proteins which are altered by trisomy 21.

Particular interests of the research of Dr. Groet is to determine which chromosome 21 genes are involved in AMKL (a myeloid leukaemia with a 400 fold increased incidence in DS) and TMD (a transient precursor of AMKL, which is characterised by spontaneous remission). To elucidate proteomic imbalances which are evoked by an additional human chromosome 21, and to study disbalances in mitochondrial make-up. A number of models of DS are used to accomplish these research goals. Additional models have been established recently, as Prof. Nizetic/Dr. Groet have been generating human induced pluripotent stem cells from DS and control cells