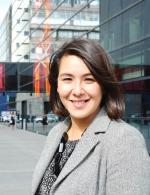 Joanna graduated with a BSc Honours degree in Neuroscience from University College London in 2003 and completed a PhD at the Institute of Neurology under the supervision of Professors Linda Greensmith and Michael Duchen in 2007. Following two subsequent postdoctoral positions at Imperial College London and Kings College London, Joanna was appointed as a Lecturer at the Barts and London Medical School, in December 2013 and promoted to Senior Lecturer in 2016. The focus of her research surrounds investigating mechanism of neurodegeneration and biomarker development.