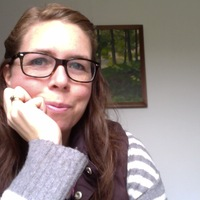 I grew up and went to school in America, in the state of Maine, and moved to New York City to attend Barnard College, Columbia University, where I earned a BA in English Literature.  I worked in publishing in New York and then completed an MA in Modernism at the University of East Anglia in 2002, writing a dissertation on Virginia Woolf, Hegel, and Freud. I then moved back to Brooklyn and worked for the New York affiliate of the National Endowment for the Humanities. In 2004, I moved from Brooklyn to London to begin my PhD on Hegel, his reception in the 20th Century, and psychoanalysis at Queen Mary.  I became a permanent member of staff at QM in 2012.

I am currently working on a project about the concept of 'inertia' and a constellation of ideas stemming from it (e.g. psychic inertia, writer's block, hoarding, and the ethics and politics of individual and communal inertia). My focus thus far is on the origins and elaborations

of the concept from Newton through the nineteenth century and in tracing its transmutation in the twentieth and twenty-first century through psychoanalytic theory, philosophy and literature.

The major focus of my recent research is the concept of intersubjectivity, which I approach in an interdisciplinary manner, drawing from twentieth-century literature, critical and literary theory, psychoanalysis, and in my current research, aspects of cognitive science. My monograph, Hegel and Psychoanalysis: A New Interpretation of 'Phenomenology of Spirit' was published in 2013 and in paperback in 2016 (Routledge). The book examines Hegel's philosophy, through the lens of his reception in the 20th Century, and argues for a reading of his work alongside psychoanalytic theory, with a focus on the work of André Green and Christopher Bollas. I explore, in particular, the concepts Force, binding, intersubjectivity, and 'thirdness'. I’ve also written on the relationship between art and philosophy - ‘Futures that Haunt Presents: On the Work of Mark Boulos and the Spirit(s) of Marxism’, Belkin Art Gallery Journal, (University of British Columbia, 2012) - and on the work of Catherine Malabou - New Formations, 2012.