In this blog post, we had a conversation with Siani Higginson, BSc Mathematics with Actuarial Science student (Class of 2020), who also runs her YouTube channel where she shares her own experience as a student at Queen Mary University of London. Siani explained what she likes about her degree programme at the School of Maths, as well as how her video content has helped many prospective students select Queen Mary as their firm choice. 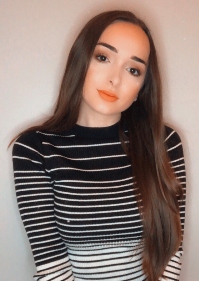 Why did you decide to study BSc Mathematics with Actuarial Science at Queen Mary?

Mathematics has always been my favourite academic subject so I knew that I wanted to pursue a degree in it. However, I also had an interest in actuarial science. Having looked at various universities, I chose Queen Mary based on the flexibility of the modules offered and the possibility of studying both subjects, while being able to work towards the IFoA exemptions.

What did you enjoy the most about your degree programme?

I enjoyed being able to study a wide range of mathematics modules while also having the option to incorporate business modules of my choice. My favourite modules were Actuarial Mathematics II and Survival Models, both of which were taught by Chris Sutton. Not only did he give us an insight into the industry, but he also delivered his lectures relating the content to real-life scenarios.

What was the most challenging aspect of the degree?

The most challenging aspect was dapting to university study. I found that if I stayed organised and ahead of my workload, I was able to overcome any challenge. This gave me time to relax and socialise, which is also very important.

Did you take part in any activities during your time at university?

During the summer between the second and third year, I completed the QConsult Summer Programme. During this time, I was able to meet students from other degree backgrounds and work as part of a team on a real-life project. I would recommend this programme as it’s a great opportunity to work on skills which can be used in the workplace, as well as networking with the associated employers.

How did you decide to start a YouTube channel?

Having watched other YouTubers document their life, I was inspired to start my own channel. When I started university, I had no idea what to expect and thought it would be useful for prospective students to get an insight into university life from a relatable platform. So far I have received an unanticipated amount of feedback with many questions focusing on the University’s local area, nightlife and the expected amount of study time. From a personal point of view, it’s been great to interact with people from all over the world via YouTube with many prospective students who have then decided to accept Queen Mary as their firm choice.

What are your plans for the future?

After graduation this year, my plan is to pursue a career in insurance or reinsurance.

Learn more about BSc Mathematics with Actuarial Science at the School of Maths.