THE ORAL TRADITION (IN WRITING)

After her look at Aesop, Anne-Marie, our Rare Books and Special Collections Information Assistant, has taken a closer look at the oral tradition of storytelling and how it has developed over time, up to the present day.

Oral Tradition what is it?

After writing and sharing with you Aesop and his fables, it got me thinking, what is oral tradition?

We know that Aesop lived during the time when the written word was not known or fully established, so people relied on the spoken word. It is a form of communications of ideas that has become part of the community, cultural and historical traditions of its peoples. It is the stuff of heroism, stories, myths and legends that come alive through the storyteller, with fairy tales, folklore, ballads, and epic poems that have been passed down through the centuries by word of mouth and in time became a family tradition.

A family would learn an epic story; every detail, the nuances, the punctuation marks, the pauses, within the story would be accounted for. The characters, humour and change of voice would come alive, and keep the audience engaged and asking for more. This would be learnt in great detail, and passed on.

Greek literature has influenced not only its Roman neighbours to the west but also countless generations across the European continent. Greek writers are responsible for the introduction of such genres as poetry, tragedy, comedy, and western philosophy to the world.

About 800 BC, just after Aesop and his fables, Greek literature began to take hold. It was the blind poet Homer who wrote the Iliad and Odyssey. These were two epic poems that were performed to an audience but still working in the oral tradition. The bard who related the story, singing to the audience, had an astonishing memory, learning vast chunks of verses and turning every performance into an improvisation, accompanied by one musician on a one string fiddle.

But here we find Homer’s epic poems were recited and sung. Was this their purpose? No, this was a written work of a genius, to tell its audience where their roots lay and what made them who they were.

In Queen Mary rare books collection we hold a Latin translation of the Iliad from 1743 and a volume with parallel texts in Greek and Latin of Homer’s work, from 1881. 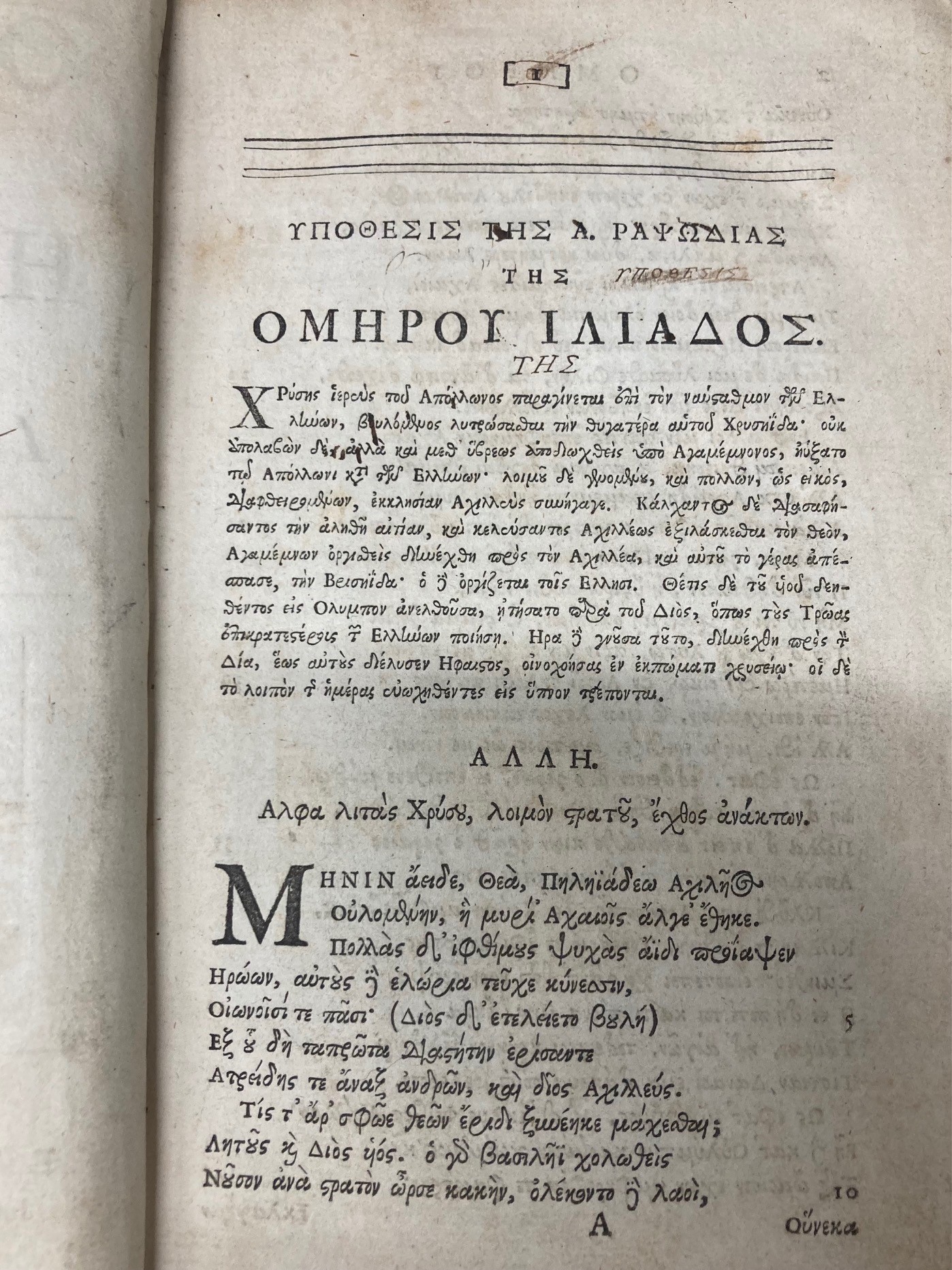 The first page of the Iliad, from the 1743 edition held in our rare book collection

So we start with the Iliad, the beginning of the quarrel “Anger by now your song, immortal one.” The Greeks of Troy have sacked and plundered a nearby city and Agamemnon, the king, has seized a daughter of a priest of Apollo as a prize. Thus, the epic Trojan War begins.

Homer’s epics poems span two worlds: the oral and the written. We know this as there is reference to writing in book 6 of the Iliad. Prince Bellerophon is sent off with a deadly cipher, magical works, hidden in a folded tablet. The tablet contained instructions to King Iobates of Lycia to arrange for the death of Bellerophon. This shows that Homer and the people of that day were aware of writing, or some form of early script but perhaps unable to write it themselves.

Between the years of 750-550BC oral literature became written literature. So, after the end of the Trojan War, as Greek city states began to emerge and people started to live in peace, people began to tell their stories. The first guilds of bards, singers and reciters roamed the towns and villages telling the stories of their history. When performing the performers used a particular verse form, in which each line is a hexameter, six “feet” of 13-17 syllables, depending on a number of short and long vowels. Gradually these stories became self-contained, like the tale of Odysseus and the Cyclops. Some performers got into the habit of writing down the stories using ostraca (a broken piece of pottery that was written on), papyrus or parchment to write down the opening lines, or links between stories to help them to remember their lines.

It was at about this time that scribes began to appear, who wrote down the poems as they were recited by the performers. It was a very hard task for singer and scribe.

Someone approached the singer and asked him to tell the song so that he could write down the words.  In a way this was just one more performance for the singer, one more in a long series. Yet it was the strangest performance given. There was no music and no song, nothing to keep him to the regular beat except the echo of previous singings and the habit they had formed in the mind. Without these accompaniments it was not easy to put the words together as he usually did. The tempo of composing the song was different, too. Ordinarily the singer could move forward rapidly from idea to idea, from theme to theme. But now he had to stop very often for the scribe to write down what he was saying, after every line or even part of a line. This was difficult, because his mind was far ahead. But he accustomed himself to these new process, and finally the song finished.

A living thing had been captured, and one world sacrificed to create another.

It is believed that the Judo Christian tradition was passed down orally from each generation to the next in an unbroken chain.  The Torah, the Law of God became the Book of the Old Testament. The Israelites committed to memory the scriptures that became their inheritance in song and “mnemonics,” which were made into verse and easier to remember. Following the destruction of the Second temple in 70 CE, it was then set down in writing.

Not long after that the oral tradition continued to spread in the teaching and the life of Christ. Jesus used the Old Testament prophets’ practice of proclaiming the word of God which demanded accurate preservation of inspired teaching. These were the parables that illustrate spiritual truth in everyday things such as fish, bread and seeds, things that people can relate to, and which sparked a spiritual understanding in some people. Jesus used the same Hebrew method of teaching to his disciples. The disciples began to understand very early on that if Christ was their saviour, they must accurately quote and write down his words verbatim.

The early Christians combined the written and oral collections together known as “Proto-gospels”, St Luke’s mentions many earlier narratives about Jesus. The authors of the four gospels combined and become the Synoptic Gospels of Mathew, Mark, Luke and later John.

Then we have the Acts of the Apostles; after Jesus’ death and resurrection they went out preaching the word of God and the teaching of Jesus. They travelled through Palestine along the Levant and up through Asia Minor and surrounding areas. As they travelled, they wrote letters to each community spreading the word of Jesus and his teachings such as the Letters of Paul to the Church of Corinth. Each of the Apostles wrote letters addressed to the Christians in general.  This was the beginning of Christianity and the New Testament as we know it today.

After the events recounted in the bible, the development of myths and legends continued through Mesopotamia and the Persian lands. The myths of Alexander the Great and his exploits became legendary, part of the oral history and traditions. During the Iranian revolution in 1979 the stories of Alexander continued to be told and performed to audiences in coffee houses.

Ballads derive from medieval French ballades, with an accompanying musical chanson form. Ballads slowly changed and became narrative verse which is set to music. These ballads became very popular in England, Ireland and Scotland, and spread widely across Europe.

On our own shores Sir Walter Scott had a great interest in literature, poetry and ballads. In the 1790s he engaged in research in manuscript collections and on border “raids” to collect ballads from oral performances. We have two volumes containing examples of these Scottish songs in our rare book collection at Queen Mary.

From Aesop and Homer oral traditions took a leap forward in the late twentieth century and early twenty first century in the form of social media. This is perhaps the modern equivalent way of sharing thoughts, ideas and information, using computers, smart phones and tablets as a way of communicating across the world. Who would have thought that the message that Prince Bellerophon in Book 6 in the Iliad, took to the King Iobates of Lycia in a “folded tablet” would now take a different shape and format?

In Syria’s capital Damascus there are many cafés where they tell stories in the oral tradition. There is still one known as the storytellers’ café, the al-Nofara café which is one of the oldest cafés in Damascus. The storytelling has stopped since the war began but for a community of Syrian refugees and refugees around the world who have been displaced, social media is a way of keeping in touch with family and friends telling the stories of their past and present to the next generation.