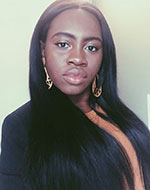 Stitching The Gap: Closing the Wage Inequity With Copyright (An Exploration Of The Role Of Copyright Protection In Addressing The Gender Pay Gap And Economic Disparity In Film Industries, Using Costume Design As A Case Study)

This thesis examines the gender inequality and wage disparity between professions in the Hollywood and British film industries.

The research focuses on costume design, a vocation with a predominantly female workforce, and its wage disparity with similar professions in the film industry. It aims to establish the importance of costume design to film by presenting its contribution to the creative and economic success of the film. The thesis also seeks to consider how granting copyright protection in favour of original film costumes would help redress gender inequality, empower female workers, mitigate discriminatory practices in the film industry, and promote the art of costume design for motion pictures.

Uchechukwu is an Intellectual Property lawyer, with a focus on the creative industries. She holds a Masters in Intellectual Property Law from Queen Mary University of London, where she researched film theory, marketing, merchandising, costume and copyright, and graduated with Distinction in 2019. She was called to the Nigerian Bar as a solicitor and barrister in 2016 and has experience in legal practice (commercial law; sexual and gender-based violence), creative writing, visual production, voice acting, and podcasting.

Uchechukwu commenced her PhD in 2020 at the QMUL Centre for Commercial Law Studies. She is passionate about women’s rights and storytelling, particularly through the medium of film, both of which informed her current research focus.