The School and the arts 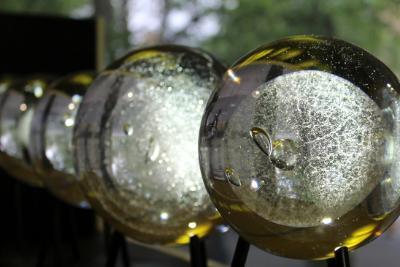 The Deparment of Physics and Astronomy is host to a magnificent glass sculpture by local artist Livvy Fink. On display in the foyer of the School's G O Jones building on QMUL's Mile End campus, the artwork reflects the research being carried out in the School, and takes its inspiration from such diverse elements as phase transitions, string theory and the high-energy collisions of elementary particles.

Installed in May 2018, the piece consists of seven glass spheres, each with a complex and intriguing internal structure that appears magnified through the natural lens of its rounded shape. It is lit by a fibre-optic arrangement that was designed by Prof David Dunstan of the Deparment of Physics and Astronomy and the artist and was built by Absolute Action Ltd.

Livvy Fink is a sculptor living and working in East London. She studied at The Royal College of Art and The University of Brighton, while also learning bohemian kiln cast glass techniques at The School of Applied Arts in Zelezny Brod, Czech Republic. In 2016 she spent time in the Deparment of Physics and Astronomy, having converations with members of each of the four research groups in the School: Astronomy; Particle Physics; Materials Physics and String Theory. Her sculpture is inspired by what she learned and it aims to communicate the wonder of physics as embodied all of those research areas.

There is also a historical connection. The G O Jones building is named for Prof. Gwyn Jones, who was Professor of Physics and head of the physics department during the 1950s. His specialist area of research was glass and in 1956 he published a book, simply entitled Glass. Though directed primarily to students of the properties of materials, it is also regarded as a valuable source for artists working with glass.

The Deparment of Physics and Astronomy challenged independent filmmakers to create short-films incorporating a series of strange sounds from space recorded by satellites. The result was a collection of films, spanning a wide array of topics and genres, connected only by these sounds. Festival director Dr Martin Archer said “I have been blown away by how the filmmaking community have taken to incorporating these sounds - which form part of my research as a space physicist - into their work. All of the submissions have been so very different, it’s made the judging process very difficult indeed.” Scientists study these waves inside the magnetosphere because of their potential effects on our technology. The festival has subsequently been touring events around the world. More information can be found on the project's website. 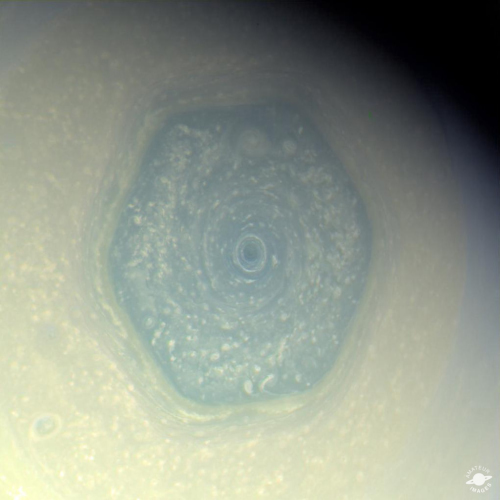 The first performance of Gustav Holst’s orchestral suite, The Planets, took place in London on 29 Sep 1918.  To celebrate the centenary of that performance The Planets 2018 project commissioned 8 composers to write short pieces of music — one for each planet — inspired by discussions with planetary scientists on the latest scientific understanding of our Solar System neighbours.

Prof. Carl Murray of the Deparment of Physics and Astronomy took part in the project and was paired with the British Bahraini musician Yazz Ahmed. Yazz composed a piece inspired by data returned by NASA's Cassini spacecraft from Saturn. She visited the Deparment of Physics and Astronomy in the summer of 2018 to meet Carl and to find out about his work and the remarkable science revealed by Cassini. Her composition is in 6/4 time, chosen to reflect the extraordinary hexagonal pattern surrounding Saturn’s north pole, which particularly fascinated her.

The entire suite of new pieces was performed by the Ligeti Quartet at the planetariums in Greenwich, Winchester, Bristol and Birmingham on successive evenings between 29 September and 2 October. Each performance was preceded by a short talk from one of the planetary scientists — Carl Murray spoke at the Winchester Science Centre performance, accompanied by composers Samuel Bordoli, who wrote the Uranus piece, and Richard Bullen, who wrote the Jupiter piece.

During each performance the planetarium provided a visual backdrop and a recorded commentary by the comedian Jon Culshaw using text written by the scientists. The first performance was reviewed favourably in The Guardian. An audio recording of the complete performance is available on the Planets 2018 website.

Theoretical physics has often been the source of new and exciting concepts in contemporary culture.  This was most in evidence a turn of the twentieth century when physicists began the development of relativity and quantum mechanics. These ideas both provided a deep alternative way of viewing the world far removed from our usual notions of perception. They challenged our view of reality by making space and time malleable concepts and by pushing the observer to the forefront of our description of nature. The art world readily embraced these ideas as they resonated with emerging ideas in both music and the visual arts. Over the years, these ideas have deeply penetrated into our cultural consciousness with ideas of quantum mechanics such as the uncertainty principle and wave particle duality part of the contemporary cultural landscape.

Now in the 21st century theoretical physics faces new challenges and has evolved in a new direction. The leading view on our description of nature goes by the name of string theory. Its development began around 30 years ago with the simple idea that the basic building blocks in nature have spatial extension- like strings. This simple idea has shown to have exceptionally deep consequences. String theory leads to ideas of hidden dimensions of space, of strangely curved spaces and of mathematically intriguing ideas of a new form of geometry.  One the most remarkable concepts is the idea of a duality. This is an ambiguity or relation between very different descriptions of nature. In “T-duality”, in the most simple setting, a large circle becomes equivalent to a small circle thus providing a pair of related objects. This idea can be extended to produce ideas such as “mirror symmetry” where different complicated curved shapes become equivalent. This “mirror symmetry” provides a surprising relationship between geometric objects that traditional views of geometry miss. Other notions such as: noncommutative geometry; holography; hidden dimensions; mathematical aesthetics and much more naturally lend themselves to the art world hungry for conceptual challenges.

David Berman is a professor of theoretical physics in the Deparment of Physics and Astronomy. He is a leading figure in M-theory and has worked on string theory for the past 15 years. He has collaborated with various artists on aspects of string theory and given talks at the Royal College of Art, the Institute of Contemporary Art and Tate Modern. He also was part of the London Frieze 2009 Cartier award-winning piece with artist Jordan Wolfson.

The Deparment of Physics and Astronomy was pleased to contribute to the 2017 E17 Art Trail, a celebration of local art across the E17 postcode region, held every 2 years.  Researchers Izaskun Jimenez-Serra and David Quénard joined forces with sculptor Amanda Doidge to describe how complex molecules that could be the precursors of biologically active substances form in space. Set against the backdrop of Amanda's sculptures inspired by the chemistry of life, the talks were a great success, popular with adults, intrigued by the science behind the search for the origins of life, and children, who had the chance to make their own models of molecules.