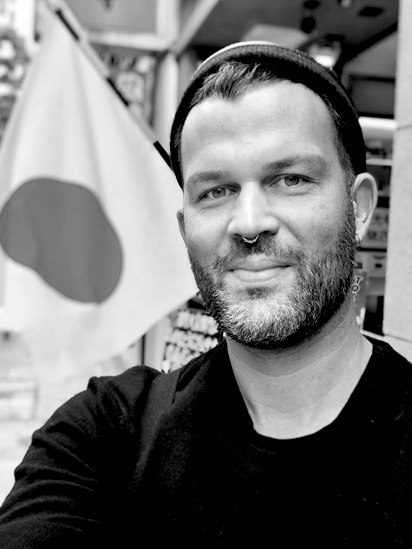 Professor of Performance and Visual Culture | Head of Drama

I am an art historian with expertise in performance art and live art – experimental forms of performance that do away with many of the formal conventions of theatre. I focus especially on artists whose work has tended to be marginalised or stigmatised in institutional and critical histories of art and performance. To date I have published original research on a range of artists including, most recently: Reza Abdoh, Skip Arnold, Anne Bean, Genesis Breyer P-Orridge, James Lee Byars, the Kipper Kids, Charles Ray, Ulay, and others. I have published books and chapters on performance art and live art in relation to such varied themes and problems as extremity and endurance, objecthood, abbreviated duration, levitation, censorship, HIV/AIDS, intimacy, and pornography. From 2005 until 2012, I presented my own performances around the world in festivals, galleries, museums, theatres and clubs, a commune, a dungeon and a desert.

In 2014 I was awarded the Early Career Research Award, an annual research prize from the Theatre and Performance Research Association (TaPRA, UK). In 2014, I was also awarded an AHRC Fellowship to work on a research project on hardship and extremity in performance art (2014-16).

I was appointed as Global Visiting Scholar in the Center for the Study of Gender and Sexuality (with the Department of Performance Studies), New York University (NYU), New York (January to April 2016); and Scholar in Residence and AHRC Honorary Visiting Fellow in the Department of English and QueerLab Research Center, University of California Riverside, (January to March 2015).

In 2018, Deirdre Heddon and I received the TaPRA Editing Prize for our co-edited book on Adrian Howells. In 2019 my book Unlimited Action was nominated for the Historians of British Art Book Prize.

I am a founder member of the Sexual Cultures Research Group in the School of English and Drama, which actively fosters and develops cross-disciplinary conversations about sexuality, gender, identity, and both intimate and public sexual cultures.

I am a member of the AHRC Peer Review College (2012-present); a Fellow of the Higher Education Academy (2016); a founding Friend of the Ulay Foundation (Slovenia/Netherlands); and an Editorial Associate of the peer-reviewed journal Contemporary Theatre Review.

I was a long-standing member of the Board of Directors of the Live Art Development Agency (LADA) for more than a decade until 2021. With the support of Lois Keidan and CJ Mitchell, former co-directors of LADA, I co-founded and convened MA Live Art, the first postgraduate programme of its kind in the UK, which ran between 2018 and 2021. We also co-edited Intellect Live, a series of books on landmark artists at the thresholds of performance, which published seven books on the work of Raimund Hoghe, Ron Athey, Lois Weaver, Adrian Howells, Kira O’Reilly, Anne Bean, and Joshua Sofaer. The series was co-published by LADA and Intellect Books.

Since 2017, I have collaborated with Queen Mary Archives to acquire for posterity the posthumous papers of significant artists working in and around Live Art whose work risks being lost, neglected, or obscured. To date we have acquired the papers of the performance artist Ian Hinchliffe (2017); the body modification artist Jon John (2018); the disabled artist and activist Katherine Araniello (2021); and Anthony Howell's extensive  collection pertaining to the pioneering British performance art ensemble of the 1970s and 1980s, The Theatre of Mistakes (2022).

I am Head of the Department of Drama.

In previous years I have convened and/or taught a variety of modules including:

My research is concerned with the cultural politics and historiography of experimental and/or marginal practices of art, including (but not limited to) contemporary performance.

I am the author of four monographs and the editor of five books. My most recent authored book is Unlimited Action: The Performance of Extremity in the 1970s, published in 2019, which seeks to provide a fresh account of the now-commonplace assertion that performance art engages with risk, difficulty, and endurance, by accounting critically for the way artists seek out, identify and strive to overcome limits; it studies the pioneering art of Kerry Trengove, Ulay, Genesis P-Orridge and COUM Transmissions, the Kipper Kids, Anne Bean and Stephen Cripps (among others). Unlimited Action has been reviewed in Art Journal, Oxford Art Journal, Journal of Visual Culture, TDR, PAJ, Theatre Journal, Theatre Research International, and elsewhere.

I regularly publish and present research on live art in the UK. I was guest-editor of a special issue of Contemporary Theatre Review on ‘Live Art in the UK’ (2012), which includes articles on major figures in the field, interviews, and artists’ pages; it was subsequently republished in an revised and expanded version as Critical Live Art: Contemporary Histories of Performance in the UK (2013), with a new foreword by the late Carolee Schneemann.

I have published extensively on aspects of visual art and culture, including: essays on and interviews with artists; contributions to exhibition catalogues and artists’ books; interviews and artist profiles in magazines such as Art Monthly; and a short book, Theatre & the Visual (2012), which explores the contingency of visual experience in historical and contemporary theatre and performance. 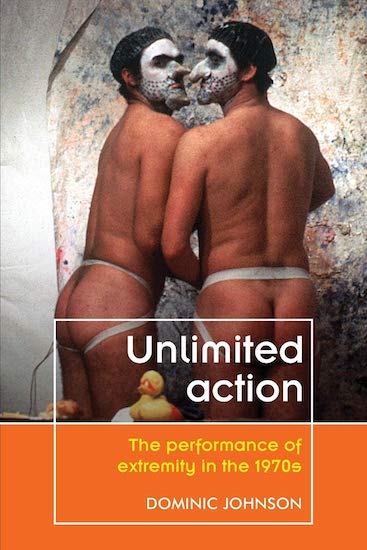 Interviews in Journals and Books (Selected)

I welcome queries and applications from prospective doctoral students. 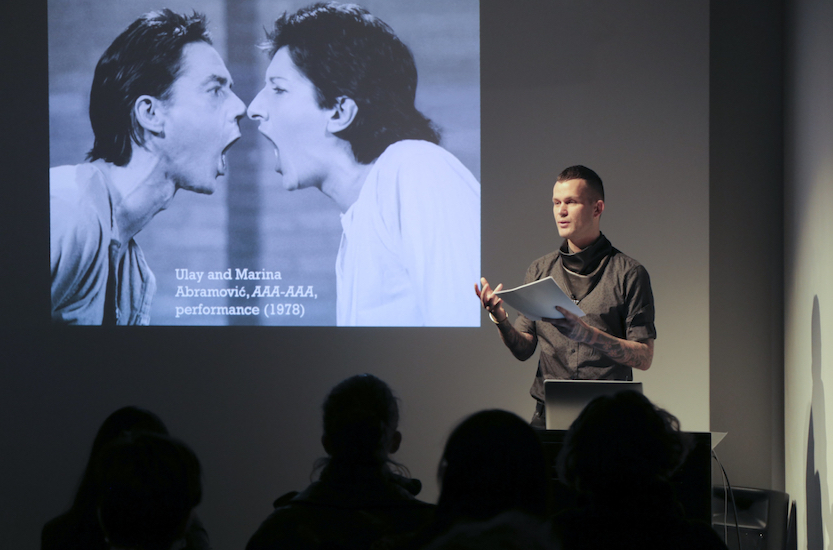 I have curated many large-scale public events, including: talks and screenings with, most recently, the Kipper Kids (Tate Britain, 2019) and Skip Arnold (Live Art Development Agency, 2019); a public engagement project on the legacies of Ian Hinchliffe, Lol Coxhill, Rose Finn-Kelcey and Roger Ely (Afterlives with Lois Keidan and Dave Stephens, Queen Mary, 2017); the one-day symposium Unlimited Action: Limits of Performance at Whitechapel Gallery, with Ulay, Anne Bean, and Nigel Rolfe; a series of artists’ residencies and a symposium on performance and politics in the 1970s, also at Whitechapel Gallery (with Nicholas Ridout, in collaboration with Acme Studios, Live Art Development Agency, and Matts Gallery, 2015); two series of Action Lectures by performance artists at Queen Mary (2015-16); an 18-month festival of performance art funded by Arts Council England (with Lois Weaver, 2010); and a retrospective of and symposium on the films of Jack Smith at the Institute of Contemporary Arts (with Matt Williams and LUX, ICA, 2011); and many other one-off events and public engagement activities. With the Live Art Development Agency I founded and convene the Annual Live Art Lecture at Queen Mary (since 2019).

‘Love on Me: Life and Death in Jon John’s Archive’, Synergy Between Humanities and Natural Sciences in Cultural History and Theory, 2nd International Conference of the Department of Doctoral Studies, Art Academy of Latvia, Riga, 2022

‘Hamad Butt: Sublimission, or Death’, The Carrier Bag Theory of Art History: Experimental Writing In, On and Alongside Feminist and Queer Art (panel) at Association for Art History (AAH) Annual Conference, Goldsmiths, University of London, 2022

‘Love on Me: Life and Death in Jon John’s Archive’, Live Art: Histories of the Present (symposium), University of Glasgow, 2022

‘Love On Me: Life and Death in Jon John’s Archive’, Don’t Leave Me This Way: Accessing and Activating Challenging Archives (symposium), University of Bristol and Arnolfini, Bristol, 2020

‘Becoming an Object: The Performances of Skip Arnold’, research seminar series, Department of History of Art, Edinburgh College of Art, University of Edinburgh, 2019

‘Body Probe: A History and Theory of Piercing in Performance Art’, 23rd Annual Conference of the Association of Professional Piercers, Las Vegas, US, 2018

‘An Eight Day Passage’, Human Resources: Whither the Human? On the Human as a Quantitative-Qualitative Resource (conference), Institute of Education, University College London, 2018

‘There is a Criminal Touch to Art: Ulay Steals Germany’s Favourite Painting’ (and conversation with Ulay), Ulay: So You See Me – An International Symposium, Cooper Gallery, Duncan of Jordanstone College of Art, University of Dundee, 2017

‘An Eight Day Passage: Endurance and Performance Art in the 1970s’, Centre for the Study of Gender and Sexuality, Tisch School of the Arts, New York University (NYU), 2017

‘Institutional Bodies: A Roundtable on Pedagogy and Risk’, Department of Performance, School of the Art Institute of Chicago, Chicago, US, 2016

‘K. O. Kippers: The Kipper Kids and the Art of Sabotage’, Department of Performance, School of the Art Institute of Chicago, Chicago, US, 2016

Keynote speaker, ‘Incendiary: Fragments of a Poetics of Fire in Performance’, A Day of Incendiary Art, MU Eindhoven (museum), Netherlands, 2015

‘Naked Hitchhikers: The Private Photography of William A. Rhoads’, How to do the History of the 1970s: Unearthing and Archiving Queer Lives, Edinburgh College of Art, University of Edinburgh, 2015 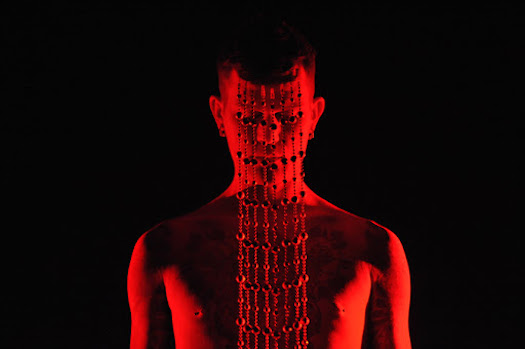 I have presented solo and collaborative performances both nationally and internationally. My performance solo Transmission was presented more than twenty times between 2007 and 2011, at festivals including Fierce (Birmingham), National Review of Live Art (Glasgow), Queer Zagreb (Croatia), Visions of Excess at SPILL Festival (London), International Festival of Performance (Copenhagen), Commitment Issues (Toronto) and as part of Gay Icons at the National Portrait Gallery (London).

I collaborated on two performances with Ron Athey: Incorruptible Flesh (Perpetual Wound) was co-commissioned by Chelsea Theatre (London) and Fierce (Birmingham) and presented at both festivals in 2006 and 2007; a subsequent piece, Self-Obliteration Double Bill, was performed at Souterrain Porte IV: Monstres (Maxéville), 2007) and Donaufestival (Krems, 2008). I have also performed extensively in clubs, including at Duckie (2008, 2009) and Torture Garden (London, 2007; Rome, 2008; Maxéville, 2009; and Edinburgh, 2010). My most recent practice-based research project was a series of performances involving live tattooing, which was funded by a Grant for the Arts from Arts Council England, and toured nationally in 2011-12.