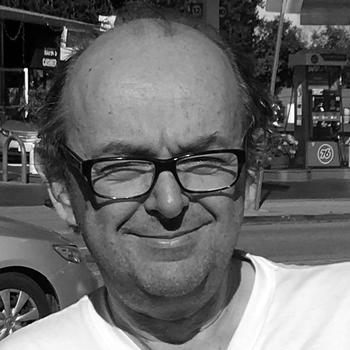 I went to a state secondary school in Cheltenham where I first started to take an interest in theatre and performance. I then did a BA in English at Cambridge before working for nearly fifteen years, making theatre and performance in London and New York, and researching and writing about Middle East politics. I taught at Wimbledon School of Art for five years and studied for a PhD at Birkbeck College, London University, which I finished in 2003. I came to Queen Mary as a Lecturer in Performance in 2002.

In my research I am interested in developing a political understanding of the theatrical event. This means thinking about theatre as an instance of cultural production, as an affective experience and as a mode of social organisation. The main focus of my work so far has been on the theatre of modern capitalism, in which people spend their leisure time sitting in the dark watching other people working in the light. The strange feelings and peculiar social experiences involved in this activity were the subject of my first book, Stage Fright, Animals and Other Theatrical Problems (2006). My next book, Passionate Amateurs: Theatre, Communism and Love (2013) took up similar ideas, but with a particular emphasis on twentieth-century romantic anti-capitalists for whom theatre has offered a way of reorganising our relationship with work.

My current work ­ Scenes from Bourgeois Life – considers the history of theatre spectatorship in Britain as an aspect of a society in which leisure consumption made possible by colonial expropriation becomes a crucial dimension of economic and cultural life. To this end I am extending the range of my historical inquiry back to the early eighteenth century.

I am the Editor of Theatre Survey and co-editor, with Patrick Anderson, of the book series, Performance Works, at Northwestern University Press.

In 2016-17 I was the Fletcher Jones Foundation Fellow at the Huntington Library in San Marino, California.

During academic year 2017-18 I am in Berlin as a Fellow of the International Research Centre “Interweaving Performance Cultures; at the Freie Universität.

‘Opera and the Technologies of Theatrical Production’, in The Cambridge Companion to Opera Studies, ed. N. Till (Cambridge: Cambridge University Press, 2012)

‘Ice, or a Collective History of the History of our Collectivity in the Theatre’, in Theater Historiography, ed. H. Bial & S. Magelssen (Ann Arbor: University of Michigan Press, 2010)

‘Two Parrots and an Answering Machine: Some Problems with Knowledge and Memory’, Performance Research 7.4: On Archives (2002), 42-47

From time to time I make or contribute to performances, and to the curation of performance events. In 2009 I worked with the director Tim Hopkins, adapting the libretto of Mozart’s Die Entführung aus dem Serail for a production at Opera North. In 2013, with my colleague Lois Weaver, I co-curated the inaugural Peopling the Palace festival at Queen Mary, and co-created and performed a new experimental theatre piece The State Department Presents (with Lindsay Goss) in Providence (USA). I continue to work with Lindsay Goss, most recently on a new theatre piece entitled quite the best news in some considerable time (2015), revived in 2016 as quite the best news in some considerable time (rinse and repeat version).