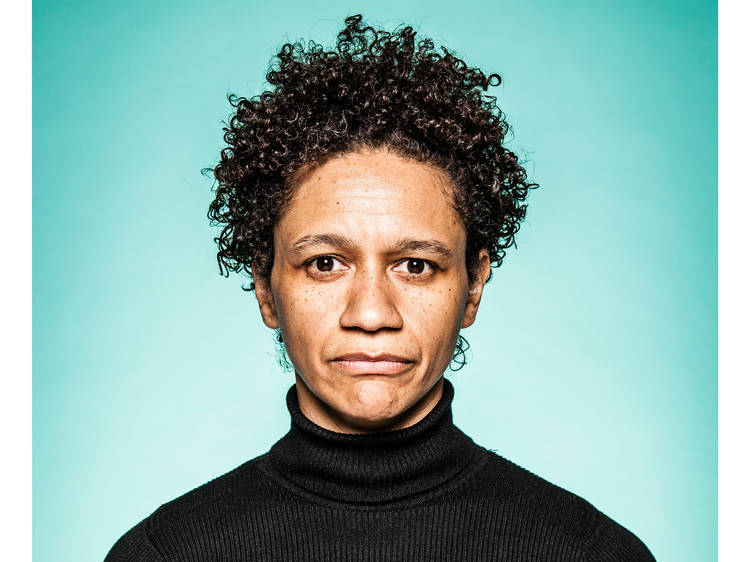 Lecturer in Drama, Theatre and Performance

I am a London born theatre artist - performer, playwright, director, producer, facilitator, teacher and researcher. I trained in Theatre of the Oppressed and Physical Theatre. I have worked internationally in theatre, television and radio for over twenty-five years, from Antarctica to Zimbabwe. My (QMUL) PhD thesis is entitled Afriquia Theatre: Creating Black Queer Ubuntu Through Performance. I have been teaching in academia since 1998, mainly at Goldsmiths, University of London, Department of Theatre and Performance. I joined the staff team as a Lecturer in Drama, Theatre and Performance in the School of English and Drama in 2017. I am currently on a fully funded 2.5 year Research Fellowship at University of Potsdam to undertake ‘White Climate: Afriquia Theatre Literatures and Agri/cultural Practices’ at the University of Potsdam, outside Berlin, Germany.

At Queen Mary I have taught on:

My next independent production entitled STARS, in collaboration with DJ DeboA of Mix ‘n’ Sync, is a play that transforms into a club night, all about a very old lady who travels into outer space… in search of her own orgasm. STARS investigates connections between astronomy and female sexuality through the lens of the Dogon culture of Mali. The STARS project includes participatory intergenerational workshops with girls and women creatively exploring the power of pleasure, motivated by my desire to address issues arising from sexual trauma and Female Genital Mutilation as well as celebrating the achievements of women of the African diaspora in space travel.  STARS opens at Ovalhouse Theatre, London, in 2021. My play Wind / Rush Generation(s) o pens at the National Theatre (Connections) in 2020 and will be presented by youth theatres across Britain. I am also developing a new methodology with Dr Nicole Wolf (Goldsmiths, Visual Cultures) to teach Permaculture through Theatre of the Oppressed techniques. We are developing this work in community gardens Berlin and will be extending the work in collaboration with gardeners and artists in Palestine and Kashmir. Lastly, I am currently on a fully funded 2.5 year Research Fellowship at University of Potsdam to undertake ‘White Climate: Afriquia Theatre Literatures and Agri/cultural Practices’ at the University of Potsdam, outside Berlin, Germany.

_______________, ‘The Supernatural Embodied Text: Creating Moj of the Antarctic with the Living and the Dead’ in Sue Broadhurst and Jospehine Machon (eds) Sensualities / Textualities: Writing the Body in 21st Century Performance, Basingstoke: Palgrave Macmillan, 2009, p92-102.

All of my theatre practice engages with the public. I focus on work with communities who have been marginalised including working with people who are young, Black, Asian, D/deaf, disabled, HIV+, homeless, slum dwellers, living under occupation, incarcerated, in children’s homes, affected by the criminal justice system, female survivors of gender based violence, elders. I have worked with numerous theatre companies including Cardboard Citizens, Pan Arts, Clean Break, Care to Act, Heart n Soul, idle women, Half Moon Youth Theatre, Vidya slum dweller’s theatre company and Ashtar Theatre, Palestine to name a few.

My diverse work has ranged from being an actor with the Royal Shakespeare Company to co-founding VIDYA, a slum dweller’s theatre company in Ahmedabad, India, who inspired the Theatre for Development Handbook co-written with John Martin and Manisha Mehta. All of my performance work is concerned with social change. Having trained extensively with and worked alongside Augusto Boal, I am a specialist facilitator in Theatre of the Oppressed, being invited to work particularly in areas of conflict, crisis and occupation. I am an Associate Artist for Pan Intercultural Arts with whom I work internationally. I mentor young and emerging artists including working as dramaturg for Four Corners production BLINK, with an inclusive cast. I have written poetry for many years and even had a stint as a teenage street rapper.

However, it was in 2005 that I embarked upon writing and producing plays as my primary focus through Moj of the Antarctic: An African Odyssey, which was researched on Antarctica and premiered at Lyric Hammersmith (2006) before national and international touring. This was followed by Muhammad Ali and Me (Ovalhouse, 2008) in which I also performed. Muhammad Ali and Me was revived in 2016 at Albany Theatre, toured nationally and is being adapted for screen. Matt Henson, North Star was developed in Greenland through Cape Farewell (Lyric Hammersmith, 2010).

My first commission was Desert Boy (Nitro, Albany and national tour, 2011). The Listeners, a play for young actors, commissioned by Pegasus Theatre Company, in partnership with The Samaritans (Oxford) premiered in 2012. I was Writer-on-Attachment with Unicorn and Birmingham Rep where I wrote Asara and the Sea-Monstress, my first play for children, with a staged reading at Albany (2014). I co-created, co-directed, performed in and wrote I Stand Corrected in collaboration with Mamela Nyamza and commissioned by Artscape, South Africa. I Stand Corrected premiered in Cape Town, toured to London, Soweto and Singapore, has been presented at international conferences and is the subject of documentaries. I co-devised, scripted and directed Sweet Taboo for Talawa Theatre Company’s TYPT:13 (2013) and adapted the script for screen.

I have developed experimental works including 48 Minutes for Palestine, a collaboration she devised, scripted and directed for Ashtar Theatre Palestine has been touring internationally since 2010.

My most recent experiment, The Interrogation of Sandra Bland (Bush Theatre, 2017) incorporating a huge community cast and verbatim text will be filmed in 2021.

My next independent production entitled STARS, in collaboration with DJ DeboA of Mix ‘n’ Sync, is a play that transforms into a club night, all about a very old lady who travels into outer space… in search of her own orgasm. STARS opens at Ovalhouse Theatre, London, in 2021.

I was commissioned by the National Theatre to write Wind / Rush Generation(s), that also opens in 2021.